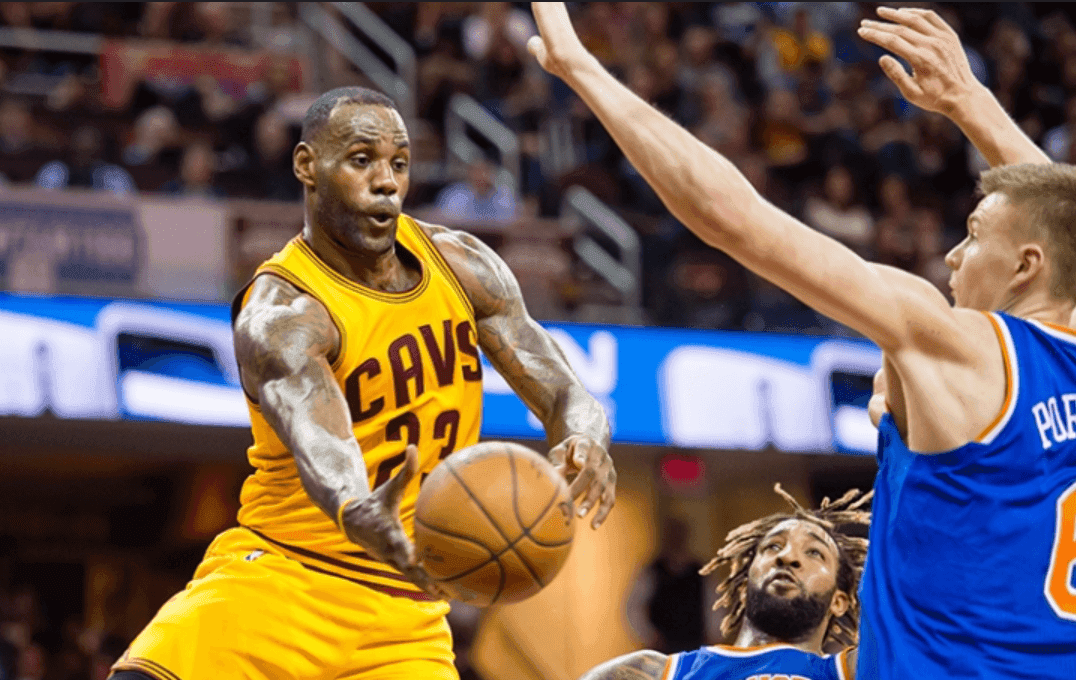 The Cleveland Cavaliers finished strong to close out the NY Knicks at the Q tonight, winning by the score of 91-84. It was an impressive finish on the defensive end of the floor, as the Cavs held the Knicks to just two points in the final four minutes of the game. They closed out NY and won this one running away, ending the game on an 11-2 run, after what looked like an ugly offensive performance for most of the second half.

Until the late fourth quarter run, the offense struggled, and in particular for LeBron James. The stat line won’t show it, as LeBron finished with a solid 24 points, 9 boards and 5 assists, but he was out of synch for a large portion of the game. He missed open layups, looked flat on his jumper, and even earned a rare technical foul after complaining about one of several no-calls in the paint. In typical LeBron fashion, though, he stepped up his energy and made the plays down the stretch to help improve the Cavs’ record to 13-1 at home this season.

Kevin Love had the most consistent game for the Cavs tonight. He tallied 23 points and grabbed 13 rebounds, and was a threat to score from almost everywhere on the court. The Knicks struggled to match up with him in the post, and when the ball moved on offense he knocked down open 3s. In his second game back from injury, Kyrie Irving, who is playing on a very strict minutes limit, only had five points and four assists in 19 minutes. It was the depth of the team behind him, however, that made big plays and helped the Cavs pull this one out.

Mo Williams rejoined the lineup tonight, and for the first time all season, the Cavs were a full team. It showed at the end of the first quarter, as Coach Blatt put in a small ball lineup that did not include a single member of the starting lineup. Williams and Matthew Dellavedova commanded the backcourt, and Iman Shumpert and Richard Jefferson, along with Tristan Thompson played the frontcourt positions. The lineup brought immediate energy and went on a 10-0 run late in the first quarter to take a double-digit lead. The Cavs, who look like they are almost completely healthy, are now showing just how creative they can be with their lineups, and how difficult they can make it for opposing defenses to match up with them on offense.

The offense slowed down after the first quarter, and the Cavs never scored more than 24 points in any quarter after scoring 31 in the first. The Knicks, playing without star Carmelo Anthony, kept it close behind the strong play of Kristaps Porzingis. The rookie and NY fan favorite proved to be a nightmare matchup, scoring 23 points and grabbing 13 rebounds, matching the stat line of Kevin Love. The Cavs much improved defense held everyone else in check though, with no other Knick scoring more than 16 points for the game.

The Cavs have set the stage for one of the most anticipated games of the year now. They will take a 6-game winning streak into Golden State on Christmas Day to battle the Warriors in a rematch of last year’s NBA Finals. Finally having a full lineup, fans will see if the Cavs can continue their strong play against the NBA’s most elite team.

Kyrie Irving draws all the attention from Knicks defenders, setting up Timfoey Mozgov for a big time dunk.
dunk.

Up four at 86-82 with less than a minute left in the game, the Cavs ran their offense with LeBron James getting a screen from Delly. James fakes right and drives left right at the basket. With a wide open lane for LeBron, Kristaps Porzingis gets ready to go up and contest LeBron, but quickly realizes he’s too late, giving LeBron a wide open, rim rocking dunk.