For the second consecutive game the Cleveland Cavaliers won a game in which the final score did not indicate how the game was played. The Cavs dominated the 76ers on Monday, but limped home to win by just seven. Tonight the Cavs beat the NY Knicks by 10, but struggled throughout the majority of the game, not taking their first lead until a Matthew Dellavedova lob to Tristan Thompson put them ahead at the end of the third quarter. The performance was subpar almost all the way around, but the Cavs found a way to grind it out and get the victory to improve to 4-1 on the season thus far.

Much like the game on Monday night in Philadelphia, the Cavs got off to a very rough start tonight against the Knicks, which was unexpected for a home game. The Cavs are still missing backcourt running mates Kyrie Irving and Iman Shumpert, and tonight was their first game of the year without JR Smith. Richard Jefferson started in his spot, but both he and the rest of the starters came out flat as the Knicks raced to a 24-9 lead. Not much changed after a timeout for the Cavs, and for the second straight game, they were staring at a 32-18 deficit after the first quarter.

The defense picked up in the second quarter as the Cavs were able to start chipping away at the lead. The Knicks only scored 14 points in the quarter, but the Cavs were still cold from the field. A quick 6-0 run brought the lead all the way down to three points at 38-35 with 4:24 left in the half. Jefferson and Timofey Mozgov accounted for all six points during the run. The cold shooting continued, however, and the Knicks built the lead back up to eight just before halftime.

The Cavs were still flat after halftime, but Mo Williams and Timofey Mozgov scored 12 of our first 15 second half points to stay on the Knicks’ heels. Richard Jefferson made his only 3 point shot of the game to keep the team within three halfway through the third. The two teams traded baskets throughout the rest of the quarter until Delly and Thompson connected on a strong alley oop dunk that put the Cavs ahead 70-69 heading into the fourth quarter.

LeBron James, who had been quiet the entire game, finally made his presence known in the final quarter. James scored 11 of his 23 points in the fourth, and helped to ignite the Cavs’ run that ultimately sealed the victory. The team would take command late, forcing tough shots, getting offensive rebounds, and knocking down open looks. The lead grew to as much as 14 with two minutes left and the Cavs were in control from then on to close out the 10-point win. Perhaps the sequence that sealed the win came when Delly drove the baseline and made a floater that appeared to be intended as a lob for Tristan Thompson. He then jumped in front of the inbounds pass, forcing Knicks center to hesitate and step across the line for a turnover. At this point the lead was 9 after the Delly made basket, and the Cavs had the ball and the clock on their side.

Mo Williams played well again scoring 22 points, and Tristan Thompson and Kevin Love both had very quiet double-doubles. LeBron didn’t shoot well, but scored late in the game when the team needed it. Dellavedova, who is among the league leaders in the +/- category, tallied seven assists in the game.

The Cavs will be without JR Smith for at least one more game, and without Irving and Shumpert for extended periods, but they currently carry a 4-game winning streak and are winning games without playing their best basketball. Here’s to hoping that continues. 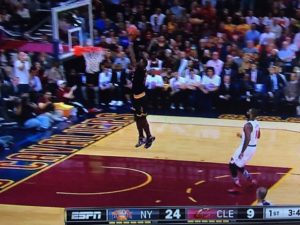 JUST IN: VIDEO: LeBron James Gets Two Steals And A Pair Of Slams