It’s a fairly common sight to see celebrities attending games at NBA arenas. However, when it comes to Madison Square Garden, home of the New York Knicks, those words ring especially true.

Last Wednesday night, the NBA’s defending champion Cleveland Cavaliers squared off against the Knicks inside New York’s famed arena, resulting in a lop-sided 126-94 victory for the Cavs.

The arena was seemingly filled with celebrities ranging from actors and comedians to artists and athletes.

Howard Stern, the famous radio show host, and his wife Beth, were both in attendance.

Woody Allen, who appeared to be nodding off in the closing phases of the game, showed up to witness LeBron James and Carmelo Anthony duke it out on the court.

Jimmy Fallon, host of The Tonight Show and known NBA fan, was caught in Fox Sports Ohio’s camera lens as it panned across the arena.

The Today Show’s Al Roker, who was formerly a meteorologist in Cleveland with WKYC, was in attendance.

A noted Cleveland sports fan in actress Katie Holmes, who most will remember from Dawson’s Creek and many other great films, was sat near courtside.

And of course, Spike Lee, the brilliant Director who tries to attend as many Knicks games as possible, was there to cheer on his team in blue and orange regalia. 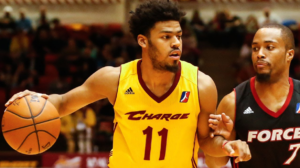