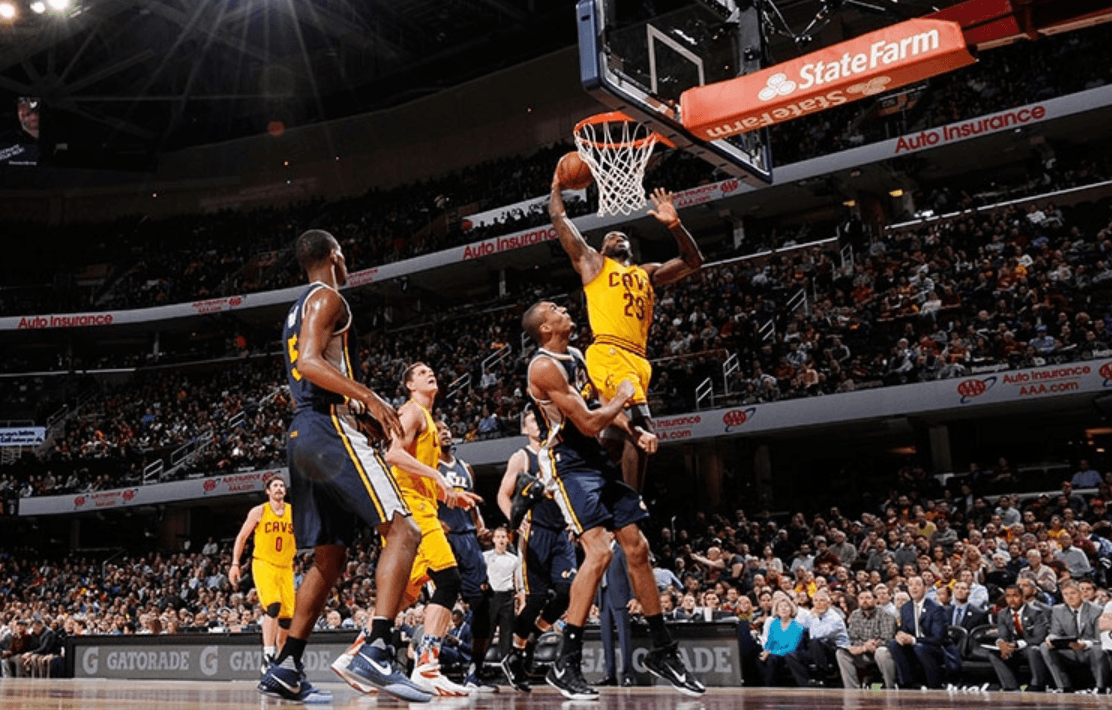 Click “Next” at the bottom of the page to see all of the highlights from tonight’s epic game!

LeBron James carried the Cavaliers past a scrappy, young Utah Jazz team tonight. The win marked the Cavs’ seventh in a row, and perhaps their most impressive of the seven. The fourth quarter was a back-and-forth affair until LeBron started making momentum-changing plays on both ends of the court. It was vintage LeBron James, and the Cavs needed every bit of it.

The Cavs started out strong, welcoming back JR Smith to the starting lineup after missing time due to a bruised knee and quad tendinitis. The defensive-minded Jazz were outmatched in the first quarter as the Cavs raced out to a 27-22 advantage. Mo Williams made his first eight shots of the game, half of which came in the first quarter to lead the Cavs early. The Jazz have a reputation for being stalwarts defensively, led by big man Rudy Gobert, who ranks among the league leaders in blocks per game. He is a difference maker in the paint, but LeBron set the tone early after receiving a pass off of a back cut from Kevin Love. James threw down a thunderous dunk that sent a message to Utah and to the rest of the Cavaliers that they weren’t afraid to attack the rim.

The Cavs got sloppy in the second quarter and the young Jazz were able to cut what was once a 12-point lead down to just four at halftime. The Jazz fed off of Cleveland turnovers and used their speed and outside shooting in transition to make their run. The bright spots for the Cavs came from Mo Williams and Kevin Love, who led the team with 15 and 14 first half points respectively.

Williams continued his strong play after halftime, scoring seven points in the first six minutes of the third quarter. The Cavs would rebuild the lead to eight, but the Jazz had much more of a run in them. This time they would close the quarter on a 16-8 run to tie the game at 80 heading into the fourth.

After starting the fourth quarter on the bench, and seeing the Jazz even take the lead by starting the fourth on an 11-3 run, LeBron decided to take over. This was not a typical LeBron James take over, however, as he was doing it with hustle plays as much as he was with timely jump shots and drives to the basket. LeBron either scored or assisted on 25 of Cleveland’s 38 fourth quarter points. He had three fourth quarter steals, one of which led to perhaps the play of the game, when LeBron practically dragged Jazz forward Rodney Hood with him off the ground for a layup plus the foul. Shortly after that he stepped in off of the weak side and took a charge on a critical defensive possession. He was directing the offense, attacking the basket, and delivering on both ends of the court throughout the fourth quarter.

The Jazz still had no quit in them, however, and fought their way to within two down the stretch. Free throws by Mo Williams and a timely 3-point play by Tristan Thompson off of a LeBron assist kept the Cavs ahead throughout the final minutes. LeBron finished with a huge night – 31 points, 8 assists, and 7 rebounds. Mo Williams lit it up as well, scoring 29 points on only nine shots. Kevin Love chipped in with 22 points and 8 boards. The glaring negative from the box score is that nobody else scored in double figures for the Cavs.

They’ll need more of a balanced effort in the very near future as they hit the road to take on the Knicks, Bucks, and Pistons starting on Friday.

Click “Next” to see all of the highlights from tonight’s epic game!

Mo Williams dishes to Kevin Love at the top of the key, and Love finds a cutting LeBron James from the baseline and dishes to him. LeBron elevates throws down the dunk on Rudy Gobert.

Delly rips the driving Trey Lyles, and starts the fast break. He takes it up court and dishes a no look pass ahead to JR Smith for the dunk.

Kevin Love gets the ball ahead on the fast break, but misses the layup and falls into the camera crew and photographers in the first row. He appears to injure some part of his leg, but there is no information about the injury at this time.

Stay tuned for the latest on Kevin Love.

LeBron gets the steal by playing the passing lane well, goes down to the other end, gets held by Rodney Hood, and still finishes the shot.

LeBron drives in late in the fourth and shoots the sweeping hook shot over the towering Derrick Favors.

The Cavs break the Jazz press break as LeBron runs the fast break off of an inbound and finds Tristan Thompson for the layup and the foul! 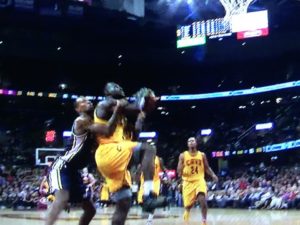