Joined by newly-appointed Cavs general manager Koby Altman and head coach Tyronn Lue, Thomas commented on what he and the other new additions could mean for the team, as transcribed by the Boston Herald’s Brad Bournival.

“Bringing in a guy like myself and Jae Crowder and Big ‘Z’, I don’t think they’ve had that in the past,” Thomas said. “They’ve been a championship-caliber team. They’ve been arguably the best team the last however many years, but I think we had something they didn’t have.”

“That’s toughness, grit and just people who have been counted out their whole careers. Me and Jae have kind of been cut from the same cloth. We’ve been counted out and we just have to keep fighting no matter what people say. That’s why we clicked so well in Boston. We want to raise that competitiveness.”

Thomas, now 28 years of age, is a 5’9″ dynamo of energy who has faced loads of adversity from naysayers throughout his entire life. He doesn’t let any of that slow him down, though. In fact, the former Washington Husky continues to prove the doubters wrong.

Jae Crowder, a player who can bang with anyone, will bring an element of toughness to the Cavs’ rotation. His ability to perform at both the three and four positions makes him a truly versatile player. In his 72 games played for the Celtics last season, the former Marquette Golden Eagle turned in some of the best stats of his career, averaging 13.9 points on a career-high 46 percent shooting from the field, 5.8 rebounds (career-high), 2.2 assists (career-high), and 1.0 steal in 32.4 minutes (career-high) per game.

With just over one month remaining until the start of the 2017-18 NBA season, hoops fans won’t have to wait much longer to see these new members of the Cavs on the court in action. 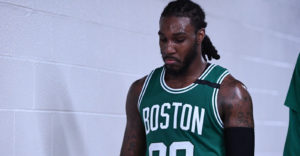