Shortly after the Wine and Gold Scrimmage on Wednesday, there were multiple reports that LeBron James left the opening game with back soreness. Following the scrimmage, Coach David Blatt did his best to downplay the issue, ambiguously saying, “I think overall LeBron’s fine. He’s got a little bit of back soreness and we’ll monitor that carefully.”

This isn’t an issue James wants to drag into the season let alone now; it’s a nagging injury that has bothered him since his time in Miami. The good news is that there were no other injury concerns following the scrimmage packed by 17,000+ of LeBron’s biggest fans.

James sat out the morning session of the Cavs two-a-day practice on Friday, the first session he’s missed for the pre-season. Questions were brought up to Blatt, about the possibility of sitting James during the season, in which he didn’t deny that could be a possibility. “Certainly could”, Blatt acknowledged, “It’s not specifically planned at this point. In other words, we didn’t sit down and already write up a plan for what game he would miss or what practice he would miss, but it could happen depending on need.”

Prior to the scrimmage, James described his back as ‘”iffy” and played in two of a possible three periods on Wednesday nights intra-squad hit out. In James’ 11 year career, there hasn’t been a huge injury concern that has niggled him, or kept him on the sidelines. In fact LeBron has played 842 games out of a possible 886 during his career. That said, the fact that this is his 11th season, LeBron’s health and injury-risk can only be higher than any prior years.

{adinserter 2}
Blatt also pointed out the fact that some of James’ veteran teammates, Mike Miller, Anderson Varejao and Shawn Marion, have ben given time off for “maintenance”. These Cavaliers are simply preparing themselves for the grind of their upcoming season. Every time this new and improved Cavaliers squad takes the floor, they will be pushed, pulled and taken to the brink. Playing 82 games and calling it a season is no longer Cleveland basketball.

One of the keys for the entire season will not only be the production of Anderson Varejao, but also his health. Andy’s has definitely done his time with the doctors in his career. In his 10 years, Andy has only taken the court 534 times out of a possible 820. With his extremely risky style of play, Andy has dealt with it all, from ankle sprains and knee tendinitis to torn ankle tendons and broken wrists. He even a season ending blood clot! Varejao finished out last season as Spencer Hawes’ backup, which might have just been a blessing in disguise; it means that we get an Andy that isn’t recovering from a season ending surgery from a starting position in diving for loose balls and fighting for rebounds.

Most see Kyrie Irving as injury prone, or is it just an unlucky run? He’s managed to break his hand, hyperextend knees, sprain shoulders, and had a nasal and jaw fracture. The facial fractures were cases of Kyrie attacking the rim hard, putting his body on the line with the uncertainty of how he’ll finish the play. Former Cavs coach Byron Scott based it all on bad luck, but the question has to be, when will this bad luck dry up? If that time is ever, it’s now, with Kyrie no longer having the entire weight of Cleveland playoff hopes sitting on his shoulders.

As for the rest of the squad, it seems to be a clean bill of health. Mike Miller has had a bit of a reputation for being injury prone, but he just came off a healthy season and was very productive. Brendan Haywood has a bit of a lingering foot injury, but should be 100% before the season starts.

LeBron and company are expected to suit up, and play this Sunday against Blatt’s old club, Macabi Tel-Aviv, in Cleveland’s first pre-season game. 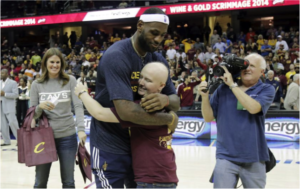