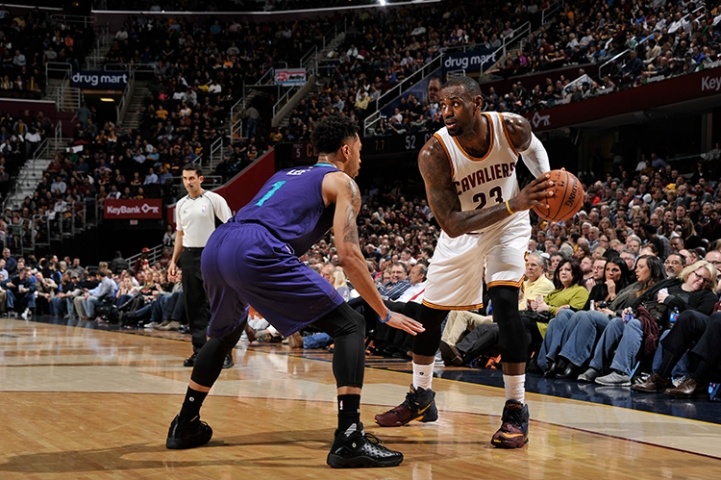 The Cavs bounced back from a rare home loss earlier in the week, finding their offensive rhythm to race past the Charlotte Hornets tonight by the score of 114 to 103. Shots were falling from all over the court, and the ball was moving all night for the Cavs, who were looking to start another winning streak after seeing their 5-game run stopped by the Pistons at the Q on Monday night. The Cavs made 13 from long range tonight, cruising past the Hornets in the second half for the win. LeBron James, Kevin Love and JR Smith all were able to sit out the fourth and watch the bench put this one away.

The game started out slower than Coach Lue probably would have liked. LeBron, coming off of a bad 12-point effort against Detroit, looked rested and was aggressive early, scoring 10 in the first, but the Cavs as a team only scored 23 and found themselves down by 1 after the first period.

The second quarter was when the offense really started to click. The Cavs gained momentum early in the second with an 8-0 run, which was sparked by new Cavalier Channing Frye. Frye scored 5 points during the run, on his way to scoring 15 points off the bench. He also pitched in 6 rebounds. His value to the Cavs will prove itself over time, but tonight he was dynamic for the bench. Kevin Love did not have a great shooting night, but Frye came in and hit 4 three point shots, forcing the defense to honor one of our big guys on the perimeter. In the past, if Love wasn’t hitting from outside, then none of our big guys was a deep threat.

The second quarter momentum continued for the entire 12 minutes. The Cavs shot 16-23 from the field, and had 8 assists as well. The 40 points they scored was their best second quarter of the season. At the half, LeBron, JR Smith and Kyrie Irving had combined for 42 points, with 15, 14, and13 respectively.

They continued their strong play in the third by playing physical defense and efficient offense. For the third quarter, the Cavs did not commit a turnover, and after three quarters had an 18 to 7 assist-to-turnover ratio.

Frye made three of his four 3-point shots consecutively to start the fourth quarter, pushing the lead to 20 and allowing LeBron, Love, and Smith to end their nights early. The bench players made their first five from beyond the arc to start the fourth quarter, and played great defense to increase the lead and put this one away. LeBron and Kyrie shared the team high scoring tonight with 23 apiece. They combined to shoot 18-30 from the field. JR Smith followed with 16 points, Frye had 15, and Matthew Dellavedova had 10 to round out the double-digit scorers. Kemba Walker led the Hornets with 20 points.

The next game for the Cavs is in Toronto against the eastern conference second-place Raptors. 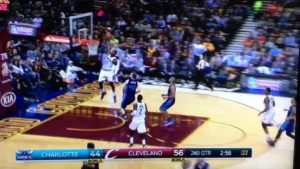 JUST IN: VIDEO: J.R. Smith Saves Ball And Throws Ahead To LeBron James For Rim-Crushing Dunk