The recent firing of David Blatt put the Cleveland Cavaliers, once again, under public scrutiny due to the circumstances surrounding the move. A lot were said about the organization and their leader, LeBron James.

Six games have passed and the Cavs have won five straight under coach Tyronn Lue’s helm. His handprint on the team’s new and high-octane style of play is very much evident. While Lue definitely deserves all the credit he’s been getting for the team’s resurgence, the players themselves also warrant praise for buying into their coach’s game plan.

According to ESPN’s Brian Windhorst and Zach Lowe, something else happened internally after news of the coaching change broke to the players.

Following a meeting called by general manager David Griffin to inform the team that coach David Blatt had been fired, Cavs players held an extended and spirited players-only meeting, sources told ESPN.com. It turned into an airing of grievances, including stars LeBron James, Kevin Love and Kyrie Irving, but eventually led to an agreement that has been a basis for the Cavs’ recent strong play.

A central issue in the discussion, sources said, was the need for accountability within the team. One of the issues that was keeping the team from enjoying some of the successes of the season was the different set of rules for some players compared to others.

A major issue during the tenure of Blatt was the players’ commitment to their head coach and among each other. But after tackling their internal issues head on, the team is now thriving under a new and more positive atmosphere. The meeting just had to happen.

“It was like ripping off a scab,” one team source said. “And it was exactly what needed to happen. I think it was what [Griffin] was hoping for.”

Said another source: “It was very healthy for the team. It probably needed to happen weeks ago.”

The highlight of this current Cavalier run is undeniably their trouncing of the San Antonio Spurs a few days ago. The team certainly looks to be having fun and as a result, they have scored at least 110 points in all of their five wins under coach Lue. Kyrie Irving seems to be more aggressive, Kevin Love is getting more, and consistent, touches at the right spots, and LeBron James is facilitating in superb fashion.

This is now a brand new team residing in Northeast Ohio and all those losses to San Antonio in their first meeting, Golden State, and Chicago can now be regarded as no clear indication of how the Cavs will fare should they meet again in the postseason. 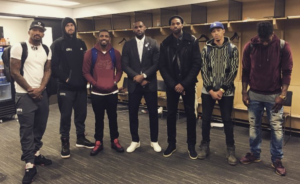 JUST IN: Kevin Love Is Ecstatic To Finally Be A Part Of The Team’s Postgame Photo
Related TopicsCleveland CavaliersDavid BlattNBATyronn Lue