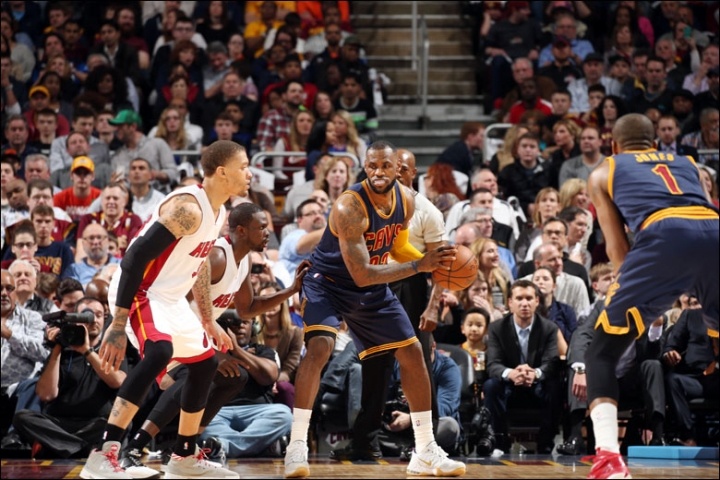 The Miami Heat came into Quicken Loans Arena to face the Cleveland Cavaliers for the final time this season in a possible first-round matchup for both teams. Playing without Kevin Love who was resting a bad back, the Cavaliers were looking to get revenge as the Heat got the better of them in their previous matchup.

LeBron James was facilitating early on and he also worked the post a few times. By the halfway mark of the first quarter, it was a milestone moment for James as he scored point number 24,818 of his career to move past Patrick Ewing and claim the 20th spot on the NBA’s All-Time Scoring List.

J.R. Smith led the first quarter attack of the Cavaliers scoring nine early points as the good guys were simply moving the ball and cutting decisively. Cleveland ended the quarter by scoring on 11 of their final 14 possessions. Kyrie Irving, playing through illness, was also alluded many times by the TnT broadcast team as the best ball handler in the league.

The second quarter saw Dwyane Wade slip and do an awkward split, compounding Miami’s woes as Tristan Thompson and Iman Shumpert took over the quarter with the energy off the glass and the hot hand from distance (three three-pointers in the second quarter alone). Ball movement and their transition game were the Cavs’ calling cards in the first half, but Miami went on a 7-0 run to end the half and cut the deficit to 11.

At the half, Miami shot 54.5% from the field as compared to Cleveland’s 48.8% but the Cavs converted on seven threes while Miami only got three from deep. The Cavs also displayed active hands resulting to eight steals in the first 24 minutes of action.

Kyrie Irving started the third quarter on a flurry as he scored seven quick points. However, the Cavs went to isolations and it took the air off the ball, allowing Miami to go on an 8-2 run. Thanks to Irving and Shumpert, Cleveland was able to keep its head above waters. Matthew Dellavedova and Tristan Thompson did their best Chris Paul and DeAndre Jordan impression, connecting on an alley-oop as the ball seemed to fly from Australia to Canada for a one handed stuff. J.R. Smith ended the quarter with a buzzer beating three to cap an 8-0 Cavalier run.

The Cavs took their largest lead (at that point) of 21 on a LeBron put-back layup to flex their fourth quarter muscles. Off a jump ball between LeBron James and Hassan Whiteside, Kyrie Irving battled through 75-feet with Tyler Johnson for a loose ball despite the Cavs enjoying a 20-point lead and eventually tipping the rock off of Johnson.

The Cavaliers were back to moving the ball and it allowed them to put the Heat out for good. One interesting moment was at the 5:22 mark when James was called for an offensive foul by shoving Goran Dragic as if he’s sending a message of no love lost to the Heat. The King then converted on a layup in their next possession.

The Cavaliers were just too good for the Heat as they went victorious, 114-88. LeBron James and Kyrie Irving led the team with 23 apiece but the biggest credit goes to their bench duo of Tristan Thompson and Iman Shumpert. Double T. was a beast off the glass, grabbing 15 boards while Shump was very efficient with 17 points on 7-12 shooting with four steals.

The Cavaliers will then take their 49-27 record and go head on with their Central Division rival Chicago Bulls in another game with major playoff implications. 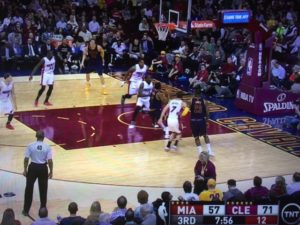 JUST IN: VIDEO: Kyrie Irving Shakes And Bakes Around Luol Deng For The Layup