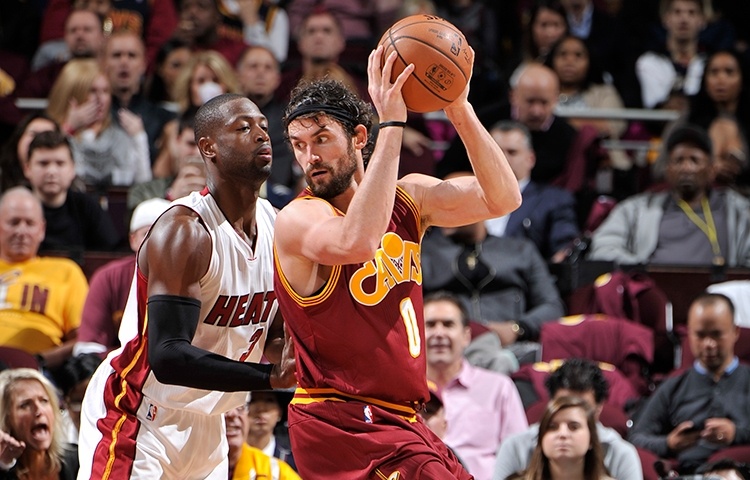 The Cleveland Cavaliers opened their 2015-2016 home campaign with a 102-92 win over the Miami Heat. Dwyane Wade started the scoring for Miami by hitting a three point shot. Moreover, LeBron James got the scoring started for Cleveland by getting them their first five points, the second basket being an and-one possession. There were plenty of storylines for tonight’s game, especially because this was James’ former team coming into his house. On a night with Quicken Loans Arena packed full of excitement and hope for a championship season, the Cavaliers led after one quarter, 29-23.

James attacked early and often and used his array of offensive skills en route to 18 points on 8/12 shooting in the first half. Tonight was Justise Winslow’s first test of his young NBA career as he had to check James on a few defensive possessions. James went right at the rookie and although he had to shoot a couple of tough shots, still managed to score. The Cavaliers led at halftime 47-42. James had the Q in hysteria after a monstrous dunk early in the third quarter. He exited the game with 1:28 remaining in the fourth quarter to MVP chants from the crowd. He finished with 29 points, five rebounds, and four assists.

Among the many storylines for the night, many wondered if Cavaliers fans would boo or cheer Tristan Thompson after his long contract holdout. He was greeted with nothing but cheers. He finished with 13 points, nine rebounds, and one stellar block on a Bosh dunk attempt. However, Thompson was not the only power forward for Cleveland that was in the news. Kevin Love played surprisingly well in the Cavaliers first two games and just the other day James said that Love would be the “focal point” of the Cavaliers offense this season. James also said that Love “will be back in the All-Star game this year.” Love finished the game with a double double as he scored 24 points and 14 rebounds.

While Wade and Chris Bosh remained seated on the bench to start the second quarter, Cleveland pushed their lead to 11. After sitting out the majority of last season due to blood clots, many wondered how Bosh would perform in his first few games back. He mentioned in a tweet earlier today that tonight was a “big game” and joked that he might be a little rusty. The rust must have wore off in the Heat’s first game because Bosh dropped 12 first half points on 5/9 shooting and pulled down three rebounds. Bosh got the scoring started for the second half and finished the game with 16 points and five rebounds. Wade was eager for tonight’s game as he said before the season that “LeBron knows” that the Heat are coming for them this year. He did not shoot the ball well in the first half with an abysmal 3/7 shooting, but he still managed to get 11 points. Additionally, he dished out two assists and grabbed three rebounds. Wade finished with 25 points, four rebounds, and three assists.

The Heat will be back home in Miami on Sunday for a showdown with the Houston Rockets at 6 p.m. The Cavaliers get a few days rest before they hit the road again to take on the Philadelphia 76ers on Monday at 7 p.m. JUST IN: LeBron James Plans To Play In All 82 Games