On Tuesday night, the Cavaliers were back in Cleveland for a matchup against the Detroit Pistons inside Quicken Loans Arena, resulting in a 128-96 runaway victory for the home team.

Cleveland’s newest acquisition, 6-foot-11 center Larry Sanders, wasn’t expected to play in last night’s game. The talented big man has been away from the NBA for two years due to a bout with depression and anxiety. However, with the game well in hand, Head Coach Tyronn Lue elected to insert the defensive-minded rim protector into the game in the closing minutes. As Sanders arose from his seat on the bench, the crowd inside the arena gave him a standing ovation.

As previously mentioned, Sanders was not expected to play in Tuesday night’s game. In fact, the Cavs have already made it known that they are sending him to their D-League affiliate team, the Canton Charge, so he can catch up to NBA speed before the start of this year’s playoffs.

Coach Lue’s decision to insert Sanders into the game wasn’t without approval, however. During his media availability after last night’s win, Coach Lue revealed that he sent a ball boy to ask Cavs General Manager David Griffin if it was ok to put Sanders in.

“I had to get permission,” Coach Lue explained with a smile. “I really just wanted to introduce him to the crowd and have him get in, give him a chance to have a standing ovation. I thought it was good for him. When you go through what he’s went through, and you have a chance to get back in the NBA on a pretty good team, I thought it was cool.”

After the game, Sanders and his new teammates reflect on the unexpected debut: 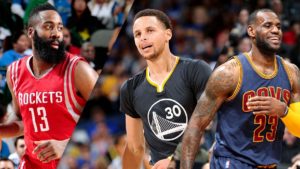