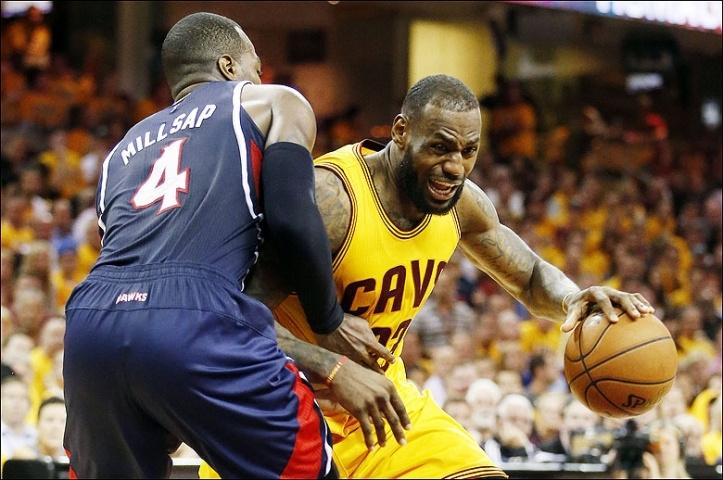 Riding on a wave of momentum after stealing the first two games in Atlanta, the Cleveland Cavaliers, hobbling and all, welcomed the Atlanta Hawks to The Q. Kyrie Irving did not play due to knee tendinitis while Kyle Korver will no longer suit up for the Hawks this postseason after suffering a severe ankle sprain in Game Two.

Al Horford stormed out the gates scoring eight points in the first five minutes while the Cavaliers’ offense was discombobulated as Matthew Dellavedova took four of the team’s first six shots. Cleveland started out 1-of-10 from the field.

The Hawks controlled the early juncture of the first quarter as LeBron James experienced the worst start of his playoff career going 0-for-10. Coach David Blatt shuffled his players in a way he’s never done this series and the Cavs clawed their way back via hustle and the home run plays as they went 4-of-9 on three-pointers and grabbed nine big offensive rebounds. The first quarter also saw a peculiar lineup that featured J.R. Smith, Shawn Marion, Matthew Dellavedova, Timofey Mozgov, and James Jones.

The first quarter ended at 24-21 for the Hawks.

Cleveland started the second quarter from where they left off as they tied the game thanks to a Delly-trey but Atlanta continued to make the most out their opportunities, taking back the lead and growing it to seven by the eight minute mark. Shelvin Mack provided quality minutes scoring six points off the bench.

The Cavaliers again found the energy, coming from LeBron James, igniting a 12-2 run and taking the lead, 42-40. Amidst the lackluster shooting, James, like he usually does, found other ways of contributing through rebounding and on-the-dot passing. Atlanta moved the ball well again and went on an 8-2 run to answer the Cleveland version and took back a four-point lead.

Rough play had a share of the spotlight as Al Horford planted an elbow to Matthew Dellavedova after a mad scramble on the floor. Dellavedova got a hit with a technical foul and Horford received a flagrant two.

The first half ended at 49-48 in favor of Atlanta. The Hawks were led by Al Horford and Jeff Teague who had 14 and 11 points respectively while the Cavs rode Matthew Dellavedova’s 14 and LeBron James’ 10 markers.

Both teams started the third quarter going back at each other for the first four minutes until the Cavs got their biggest lead at 65-58. LeBron James finally looked to have dusted off his forgettable first quarter. Atlanta tied the game at 67 behind the timely shots of their shock troopers Mike Scott and Shelvin Mack.

In a historic sequence, LeBron James notched his 12th career playoff triple double thanks to another Delly-trey to take back the lead, 70-67, and also move past Jason Kidd for second most postseason triple doubles. In the next Cavalier set, James scored on a two as he nudged by Karl Malone for the sixth spot in the all time playoffs scoring ladder.

However, during a precarious moment, LeBron James’ wrist received a hit from Mike Muscala’s head but James showed everyone that it did not matter as he took it to the hole for an emphatic slam over two Hawks defender.

Cleveland started the fourth quarter with LeBron James on the bench but with plenty of shooters on the floor and a rebounding machine, Coach David Blatt felt secure as the team went on a 7-0 run.

The Cavs kept on switching and in two consecutive Atlanta sets, Dellavedova found himself on single coverage against Paul Millsap. Cleveland got in early trouble as they were already in the penalty with over 6 minutes still left to play. Atlanta managed to grab the lead back 97-95 courtesy of a 13-2 run. J.R. Smith broke the ice for Cleveland with a three ball that tied the game at 100.

At the two minute mark, the Hawks held the lead, 102-100. Jeff Teague was untouchable as scored on LeBron James and Tristan Thompson on consecutive plays giving Atlanta a four point lead with one-and-a-half minute remaining.

Tristan Thompson scored underneath off a pass from James to cut the lead to one, 104-103. On a fastbreak play, James turned the ball over but the rest of the Cavaliers played solid defense, highlighted by a Thompson block, denying an Atlanta bucket. Iman Shumpert knocked down 1-of-2 free throws to tie the game at 104.

With 17 seconds left to play, Atlanta had possession and melted the clock until Jeff Teague missed a potential game winning three at the buzzer.

At the start of overtime, LeBron James tweaked his ankle as Atlanta drew first blood in extra session courtesy of two free throws from Jeff Teague. J.R. Smith gave the Cavs a first taste of the lead in overtime with a three ball from the elbow.

The Hawks took the lead off a Teague three pointer but LeBron James drilled in his own version of a three to give back the lead to Cleveland. The two players again took the spotlight in the ensuing play as Teague went against James but the latter, on one good ankle, disturbed the shot of Teague. James went on to will his way to the basket for a three point Cleveland lead with 12.8 seconds on the game clock.

Atlanta failed to convert on two three point attempts as the clock sounded off and LeBron James hit the floor exhausted after a historical performance which easily makes the upper half of his greatest hits list.

The Cavs were led by LeBron James who had 37 points, 18 rebounds, and 13 assists while Matthew Dellavedova, Iman Shumpert, and J.R. Smith scored 17, 15, and 17 points respectively. Atlanta had 6 players in double figures led by Paul Millsap with 22 silent markers and Jeff Teague with 30 big points.

The two teams take a night off before Game Four when the Cavaliers attempt to go to the NBA Finals and the Hawks try to stay alive.

J.R. Smith blows by his defender, gets fouled, and throws up the shot with one hand and gets the friendly roll.

Al Horford dishes to Dennis Schroder, who takes to the rim thinking he has a wide open layup. Big mistake as J.R. Smith comes out of nowhere to swat Schroder’s shot off the backboard and into the hands of the Cavs.

LeBron struggled in the first quarter, going 0-9 and went as low as 0-10, but has turned it around in the second quarter with some free throws and this move on Kent Bazemore.

Timofey Mozgov helps on the Mike Muscala drive and blocks his shot out of bounds.

LeBron James drives by Kent Bazemore and posterizes two Hawks players with this vicious slam dunk that pumped up the crowd!