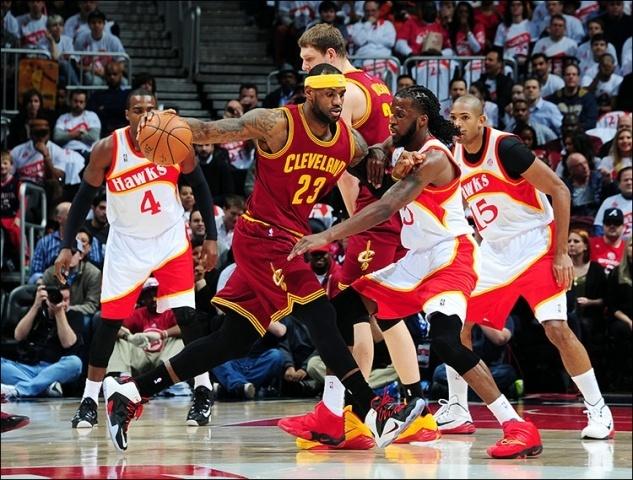 The Cleveland Cavaliers were vastly outplayed tonight in Atlanta in a game that the Hawks controlled from wire-to-wire. Despite Cleveland retaking the lead midway through the third quarter, the game always seemed in the hands of the Hawks.

Cleveland got smacked with offensive force by the Hawks in the first quarter after keeping the game close in the opening minutes. Up 11-10, Atlanta went on a 15-1 run to take a 26-11 lead. Atlanta kept pouring it on in the paint and led 36-19 after one quarter of play behind nine points from Al Horford and eight apiece from Paul Millsap and Jeff Teague.

The Cavs made four of their first five shots in the second quarter to cut the lead to 30-40. But Atlanta would answer back with a mini run of their own. The second quarter was consisted of numerous mini-runs of 4-0 and 5-0 as Cleveland would get within 10, then down by 15 again. The Cavs could not stop the Hawks inside as 26 of their first 44 points were scored in the paint. The Cavs got within 38-47, but the Hawks defense kept them from getting any closer. Cleveland trailed by 10 at halftime.

The Cavaliers made a major run to start the third quarter, one of 14-4, to get within 61-63. Two Dellavedova free throws gave the Cavs their first lead since 3-2, but that wouldn’t last long. Cleveland trailed 79-81 going into the fourth quarter after outscoring the Hawks by 15 combined points in the second and third quarters.

Mike Scott and Kyle Korver scored 10 points to start and retake a double digit lead. The Hawks were keying in on LeBron James, who came into the game averaging 29 points when playing in Atlanta. a pair of 7-0 runs in the fourth allowed the Hawks to blow the game open at 98-83 with six minutes remaining. The Cavs attempted one last comeback, but turnovers that had killed them the whole night did them in during the fourth quarter. The Hawks pulled away to win 106-97.

Kyrie Irving led the Cavs in scoring tonight with 20 on 7-16 shooting and five turnovers. LeBron James had 18 points, six rebounds, and eight assists on 5-13 shooting, but had nine turnovers in a terrible night for him on both ends of the floor. Kevin Love had 14 points and eight rebounds. J.R. Smith got some threes to go down in the second half and finished with 12 points. In addition to a struggling starting lineup, the Cavs got little from the bench other than 27 points.

The Hawks clearly wanted to send a message to the up and coming Cavaliers in winning this game. Atlanta is determined to keep the number one seed and showed that they are playing levels beyond the competition right now.

Also worth noting is David Blatt receiving his first NBA technical foul as a head coach. It happened on an offensive foul call that infuriated him.

Cleveland has no time to dwell on this loss as they go back home to play the Phoenix Suns tomorrow night at 7:30 PM EST where they’ll try and continue their winning ways over Western Conference opponents.