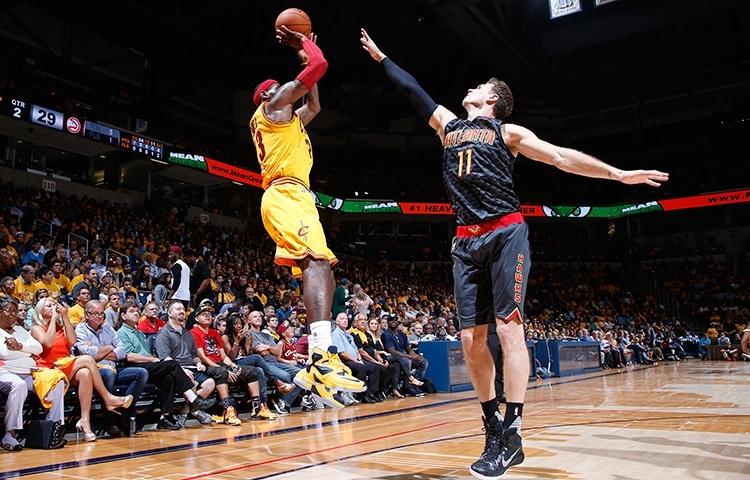 The Cleveland Cavaliers are finally back, even if it is just preseason basketball. The Cavs took on the visiting Atlanta Hawks at Xavier University in Cincinnati, Ohio in a rematch of the 2015 NBA Eastern Conference Finals.

The Cavs started out a little slow, missing a few easy shots in the first quarter, but recovered quickly as sharpshooting of James Jones and J.R. Smith as well as the inside scoring of LeBron James and Timofey Mozgov gave the Cavs an 18-9 lead. Sadly, that was the largest lead of the game for the Cavs. Down 16-23, Atlanta ended the first quarter on a 9-0 run to take a 25-23 lead after one quarter of play.

The Cavs scored 12 points in the first five minutes of the second quarter and were up 35-31, but only scored five points the rest of the quarter as the Hawks outscored them 19-5 to take a 50-40 halftime lead.

Down 10 points to start the third, Timofey Mozgov and J.R. Smith combined for 12 points, but the Cavs still trailed by 11. From there, the Cavs went on a 16-4 run capped off by a huge Richard Jefferson poster dunk to go into the fourth only down one point at 66-67.

The Cavs retook the lead early in the fourth at 68-67 after a pair of Sasha Kaun free throws, but it all went downhill from there at the Hawks took an 84-74 lead with just 5:43 left. Austin Daye came to the rescue, however, connecting on four threes and bringing the Cavs back to within two at 96-94 with under two minutes to go. The Cavs couldn’t hit another shot after that as Atlanta hit their free throws and sealed the 98-96 victory.

J.R. Smith led the Cavs in scoring with 15 points, four rebounds, and four assist. Timofey Mozgov had 13 points and five rebounds. The bench played well as Jared Cunningham had 10 points as well as three assists and Austin Daye had 12 fourth quarter points, all off of three-pointers, to go along with three rebounds.

The Cavs continue their preseason tomorrow night against the Philadelphia 76ers.

Mo Williams, a Cavalier from a few years ago, started tonight’s game in place of Kyrie Irving. What other way would he kick things off other than a corner three pointer.

LeBron is known for knocking down some crazy deep three pointers, and this is no exception. The guy has unlimited range when he is on.

LeBron gets the ball on the post, gets doubled and zips a pass to a cutting Mozgov for the two-handed slam!

LeBron James Will Sit Out Preseason Game Against The Sixers

10 Moves That Will Define The NBA Next Season

The Haks advance the ball quickly on the fast break and looked like they would have an easy basket.

Enter J.R. Smith. Smith came out of nowhere and rejected the shot off the backboard.

Anderson Varejao rebounds the loose ball, dishes to the cutting Richard Jefferson, who elevates to throw the hammer down on all of Atlanta! This was a throwback dunk from his old New Jersey days!