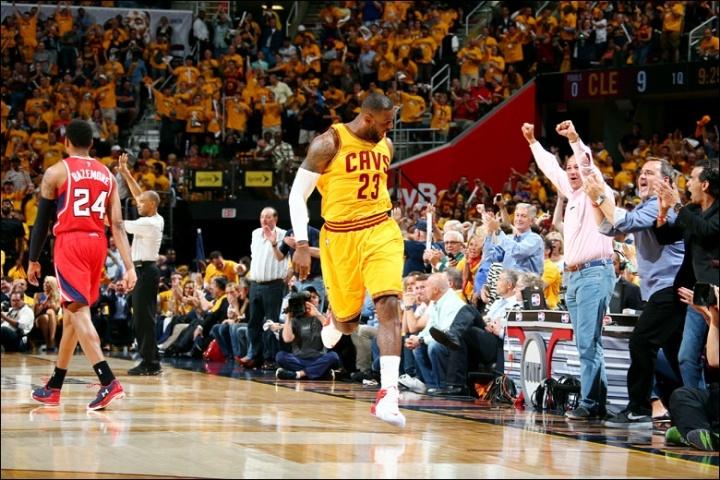 The Cleveland Cavaliers have defeated the Atlanta Hawks tonight to complete the four game sweep and advance to their 2nd NBA Finals in franchise history. Kyrie Irving returned from a two game absence tonight as well.

The Hawks started out strong against the Cavs tonight and kept the game close…for the first two minutes. Tied at four apiece, the Cavs ran off a 10-2 run to take a 14-6 lead, and by the end of the quarter, Cleveland had the lead at 32-20.

Atlanta couldn’t get much closer in the third quarter, cutting the 17 point halftime lead to 15. From that point on, Cleveland just had that extra pep in their step and upped their lead up to 25 by the end of the quarter at 85-60.

The Cavs played the second unit until about 5:30 remaining when they were able to run off an 11-4 run that effectively put the nail in the coffin at 74-103. Not that the game wasn’t over before, but the Cavs and the Q started celebrating at that point. To make matters even better, Joe Harris came off the bench and scored seven points. The final score of 118-88 was irrelevant as Quicken Loans Arena was celebrating their second ever Eastern Conference Championship.

LeBron James failed to reach his triple-double plateau as he finished with 23 points, nine rebounds, and seven assists. Tristan Thompson had 16 points and 11 rebounds while Kyrie Irving had 16 points and five assists. Timofey Mozgov scored 14 points and added seven rebounds and three blocks. J.R. Smith came off the bench for 18 points and 10 rebounds.

The NBA Finals begin on June 4. Cleveland will be on the road facing either the Golden State Warriors in Oakland, California or the Houston Rockets in Houston, Texas.

LeBron James plays the passing lane well, gets the steal, and throws it down all by himself!

Kyrie Irving, whose coming back from a two game absence, starts the game out strong by hitting a nice driving floater in the lane and followed it up with a three-pointer. Irving looks ready to ball!

Tristan Thompson grabs the offensive rebound off the Iman Shumpert miss, spins out to look for a teammate. J.R. Smith tells him there’s no time, and to put the shot up. Thompson turns and pulls and hits the shot at the buzzer!

Timofey Mozgov sets the screen for Kyrie Irving, who takes it, and throws the alley oop to the rolling Mozgov. Timo bobbles the ball a little but still finishes with a huge dunk right over the helpless Paul Millsap!

J.R. Smith catches the ball from LeBron James, fakes going baseline, and crosses Paul Millsap over. He then drives and sets up Tristan Thompson for the beautiful alley-oop dunk!

Paul Millsap dribbles the ball the length of the court and holds Tristan Thompson behind him at his hip. Thompson comes from behind as a trailer and rejects Millsap shot attempt at the rim!