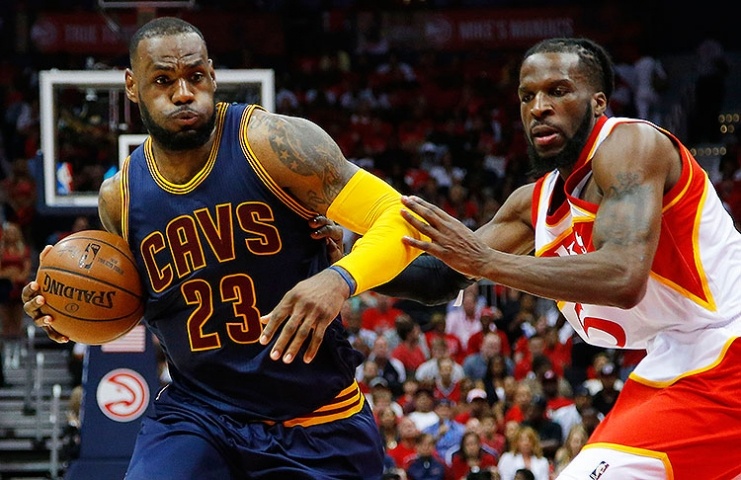 With the team medical staff advising Kyrie to take Game 2 off, Coach Blatt went with an alternate starting lineup once again featuring Delly at the point, Shumpert, LBJ, and the big men Tristan Thompson and Timofey Mozgov. On the other end of the court, the Hawk’s DeMarre Carroll is in the starting lineup despite a left knee sprain suffered in Game 1. LeBron started the game strong, challenging DeMarre Carroll, scoring seven of the Cavs first nine points, including a surprising three-pointer. The King ended the quarter with 13 points on 4-of-6 shooting. The big men also got hot early, as Mozgov hit some open jumpers and had six first quarter points and Tristan Thompson ripped down eight boards. Kyle Korver was able to keep the Hawks in it, racking up 10 points on 38of-8 shooting, including two three-pointers. The Cavs shot 9-of-18 (50%) while holding the Hawks to just 8-for-21 (38.1%) which led them into the second quarter up 26-21.

The second quarter started off with some solid bench production, with both Shawn Marion and James Jones knocking down shots, leading to a 10 points Cavs lead. The Cavs went on a slight drought, allowing the Hawks to go on an 8-0 run to bring the game within two with seven minutes left in the half. Shump got hot late and scored eight straight for the Cavs, hitting two big threes. The Hawks started to heat up too though, shooting 12-of-20 in the second quarter, keeping them within five and going into the half down 54-49.

The Cavs took off after half time, going on a 16-2 run to start the third quarter, including 4-of-6 three pointers putting the Cavs up 75-56. Big Three point shooting and all-around contributions helped the Cavs outscore Atlanta 30-17 in the third and go into the fourth with a hefty 18 point lead. LBJ snagged 11 third quarter points, giving him a total of 28 through 36 minutes. Delly and Iman helped the cause, both knocking down two threes off of assists from LeBron.

Jason Lloyd of the Akron Beacon Journal called it early with this tweet:

When LeBron starts galloping, as he was a few moments ago on Shump's 3, you know he's feeling it. Hawks are not. This is becoming a beatdown

Two key injuries for the Hawks came late in the game. Kyle Korver sprained his ankle late in the third competing with Delly for a ball on the floor. Al Horford went on to bump knees with Shump on the first possession of the fourth and had to be helped off the court. With Sefolosha out for the playoff series, as well as DeMarre Carroll spraining his knee in Game 1, the Hawks will be limited moving forward. Both would come back into the game, however it will be interesting to see how they’re feeling come Game 3. Nothing could stop the Cavs at this point though, as they kept pressing and handled the Hawks easily. Despite only scoring 10 in the 4th, they were able to hold the Hawks to just 16 fourth quarter points and just 33 second half points to get the win 94-82.

Keys of the Game:

LeBron started the game off attacking DeMarre Carroll, who was noticeably stifled by the left knee sprain he suffered in Game 1. Even after Carroll went to the bench, LBJ proved he couldn’t be guarded, challenging Kent Bazemore in the paint. James had 17 first half points, along with four assists and four boards. Better yet, LeBron was relatively smart with the ball, giving up four turnovers, but knowing when to take on a double-team versus when to drive and kick for a nice assist. LBJ checked out with nearly a triple double, racking up 30 points, 11 assists, and nine boards.

Starting in place of an injured Kyrie, Delly directed the point nicely. While he still had some trouble finding the basket going, 4-for-13 (31%), Delly made up for it in other aspects on the court. While slower than Jeff Teague, he was able to put up a fight on D, limiting Teague to just 12 points. Delly would finish with 11 points, six rebounds, and four assists. Delly gave Kyrie some well needed rest, which will hopefully allow him to come back and contribute in Game 3. 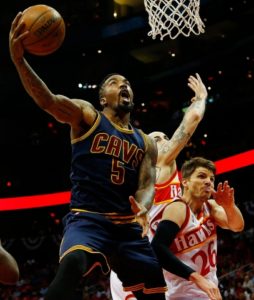 What can I say? The big man can’t be stopped on the glass. Thompson secured a new playoff-high 16 boards while ripping down 6 offensive rebounds. Overall the Cavs did an outstanding job rebounding, and are now 9-0 in the playoffs when outrebounding their opponents. The Cavs finished with 47 rebounds, 11 of which were offensive, compared to just 39 boards by Atlanta. Similar to game 1, Thompson played 41 minutes, with Mozgov tallying only 25. It will be interesting to see how Blatt distributes their playing time in the games coming up.

While Blatt still played “8” deep, the bench contribution was more diverse this game. While J.R. Smith didn’t have as good of a game as he did Wednesday night – mainly because Atlanta tightened up their D on him – he was still able to score 9 on 3/8 shooting. James Jones also had a productive game hitting 3 of 5 from beyond the arc and finishing with 9 points. Shawn Marion rounded out the bench with 3 first quarter minutes, knocking down a shot and picking up both a rebound and assist.
The Negatives:

Not a lot of negatives coming out of the game, as the Cavs handled the Hawks easily even with Kyrie on the bench. The D came out a bit slow in the first half, allowing Korver to get hot and letting Teague get to the basket. Some halftime adjustments led to some shutdown defense in the second half, allowing just 33 points. The Hawks just couldn’t hit from beyond the arc, going just 6-26 (23%), due to the Cavs getting a hand up and contesting shots. The only real problem the Cavs had was 13 turnovers. The Hawks were able to capitalize for 15 points, and while the game was still a blowout, the Cavs need to be a bit more careful with the ball going forward.

History on Cavs side: 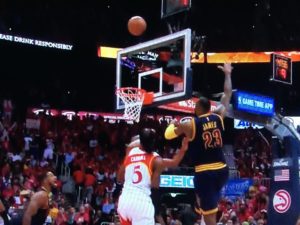 JUST IN: VIDEO: LeBron Lobs It Up To Tristan Thompson