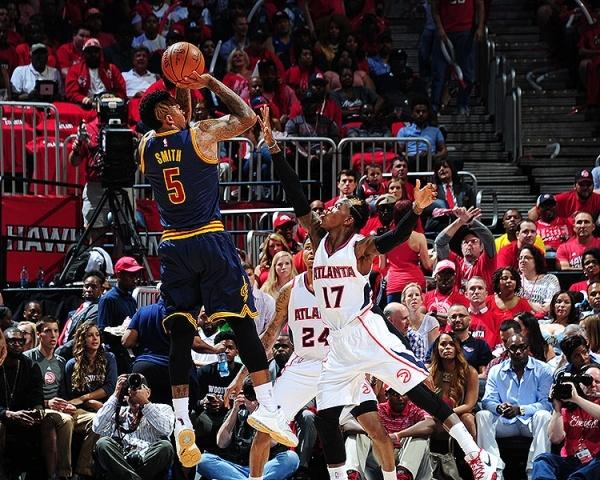 The Cavs took a trip down to Philips Arena to take on the one-seed Atlanta Hawks in the Eastern Conference Finals. Both teams made it to the conference finals in 6, with the Hawks beating the Wizards, and the Cavs taking down the Bulls.

Coach Blatt started the Cavs with a bigger lineup, using both Tristan Thompson and Timofey Mozgov. Iman Shumpert also got the call at guard, and Kyrie felt good enough to play. LeBron James rounded out the lineup against the hawks, who started Jeff Teague, Kyle Korver, DeMarre Carroll, Paul Milsap, and Al Horford. The Cavs started off at a quick pace, but fell behind the Hawks. The Cavs then switched up the lineup, going smaller, with James Jones and J.R. Smith coming in for Mozgov and Shumpert halfway through the first. A headband-less LeBron picked up two quick fouls in the first nine minutes and was forced to sit for the rest of the 1st. Thompson kept doing what he’s done best – grabbing offensive boards. The big man ended up with six boards, three of which were offensive. The Cavs held their own and went into the second quarter down 26-20, despite giving up six turnovers and only shooting (8-23, 34.8%), while the Hawks scored seven off of Cavs turnovers and shot 11-18 (61.1%).

David Blatt pulled on the reigns during a timeout, telling the Cavs to slow the pace down a little bit. J.R. started heating up, knocking down three quick threes to bring the Cavs within two. LeBron came up with a fast break and tied the game 33-33 with eight minutes to go. LeBron came back big in the second as well, scoring 14 of his 16 first half points in the second quarter. A big part of LeBron’s offense came off a screen to switch Teague onto James. The King took advantage of this mismatched and backed Teague down to the paint and was able to come up with easy buckets. The Cavs ended the quarter with a big alley-oop from Delly to Thompson, but the Hawks answered at the buzzer to tie the game at 51.

LeBron kept the Cavs going in the third, taking on DeMarre Carroll as well as picking up a three-point play. A scary moment came with 8:40 left in the third, when LeBron went up to attempt a block but rolled his ankle coming down awkwardly on what seemed to be a cameraman or fan sitting courtside. LeBron took to the bench, allowing Tristan Thompson and Kyrie to take over. With seven minutes left Kyle Korver made his first 3 of the night and got the Hawks within one. LeBron checked back in a little over 6 minutes left. J.R. was able to pick up an offensive foul on Paul Millsap, who argued the call and ended up with a technical. Millsap would pick up another offensive foul on Delly with three minutes left in the quarter. Smith would go on to hit back to back threes to give the Cavs a 71-63 lead. Smith stayed hot, shooting 7-of-11 through three, and the Cavs went into the fourth up by 74-67.

J.R. Smith kept the fire burning in the fourth knocking down a few more threes and staying hot. The Hawks tried to switch Millsap onto LeBron, who also couldn’t be contained. The Cavs jumped ahead by 14 but would let the lead slip late in the game. A scary moment for the Hawks came with 5 minutes left, when LeBron turned the ball over to DeMarre who drove down the court on a fast break and injured his left knee. After going down, Carroll had to be carried off the court back to the locker room. The Hawks went on a 13-1 run and pulled themselves back to a four point deficit with a minute left. The Cavs overcame the defense slide, with LeBron driving for a nice slam to seal the deal for the Cavs. A few intentional fouls later, and the Cavs walked away with a 97-89 win.

Overall, the Cavs played a solid game of basketball against a good Hawks team. Tristan Thompson came out strong once again and picked up a double-double. While the Cavs turned the ball over 15 times, Thompson was able to pull down 5 offensive boards to give the Cavs second chance points. Mozgov also attacked the glass tonight, pulling down 11 boards, four of which were offensive. While Kyrie’s minutes were limited, Delly came up big. While he couldn’t seem to find his shot tonight, going 0-for-6, he was able to play his high energy defense and came away with some clutch assists and defensive plays. LeBron also stepped into the point guard role, taking on double and triple teams and being able to spread the ball out, coming up with six assists on the game. And boy, did J.R. Smith have a night. He shot 10 of 16 and was unconscious from downtown, hitting a Cavs’ playoff high 8 of 12 threes. The Cavs ended up with 37 for 84 shooting (44%) and hitting 10 of 26 threes (38.5%).

The good news is #Cavs bench has outscored ATL's, 28-19. Not so good news: @TheRealJRSmith has all 28 points.

And now for the not so pretty stats: The Cavs gave up 15 turnovers, which led to 15 Hawk points. Secondly, the Cavs let up some uncontested shots. While they did hold the Hawks to just 4-22 (18.1%) three point shooting, the Hawks were able to shoot 33-75 (44%). Now let’s move on to the Cavs’ bench performance. It was the one man show, with J.R. scoring all 28 of the Cavs bench points. Delly went 0-for-6 and James Jones went 0-for-3. While the Cavs only played eight players, only six made it onto the scoreboard. The last negative comes from the charity stripe. The Cavs only got to the line 20 times, much of which came in the last minute when the Hawks were down and intentionally fouling. Of those 20 free throws, the Cavs only hit 13 (65%), also much lower than their average. If they hit a few more free throws and had a bit more contribution from the bench, they could have sealed the deal a bit earlier.

J.R. Smith has come to play in Atlanta, knocking down 8-10 from downtown!

LeBron goes right at DeMarre Carroll and makes him look helpless down low.

Matthew Dellavedova rejects the LeBron James screen, going away from it and towards the middle, where the defense comes out to him and he finds Tristan Thompson for what should be their patented Delly-to-Thompson alley-oop, since they basically do this every game.

Paul Millsap drives on Tristan Thompson, but Thompson recovers and swats his baseline floater back to his teammates, who come up with the rebound.

With J.R. Smith catching fire, DeMarre Carroll was assigned to defend him. That meant Paul Millsap had to guard LeBron James. Or at least, he tried to.