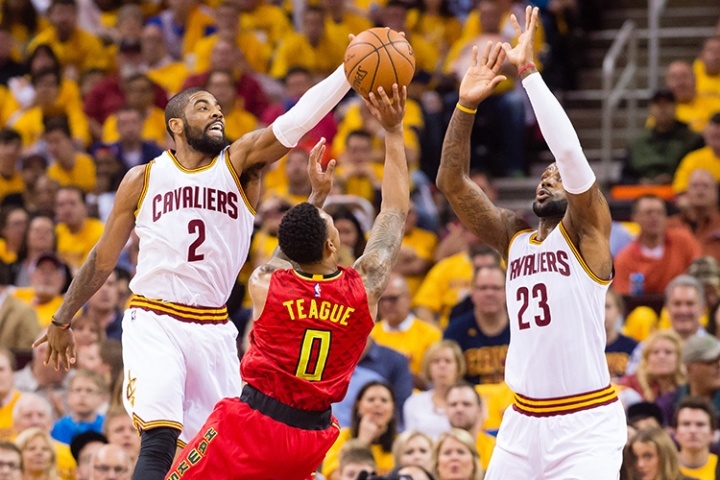 The Cavs fought back for a Game 1 win against the Hawks tonight, taking their first game after an eight-day layoff by the score of 104-93. The win marks the eight consecutive victory over Atlanta, including a four-game sweep in last year’s Eastern Conference Finals. LeBron James led the way with 25 points, nine assists, and seven rebounds. Kyrie Irving scored 21, followed by Kevin Love with 17 for the Cavs. Love also cleaned up with 11 rebounds, which was second on the team only to Tristan Thompson, who gathered 14 boards while playing great defense all game long.

As they should have, the Cavs came out of the gates like the team that had been resting after a first round sweep. The offense was crisp and shots were falling from all over the court. The defense was swarming and chasing the Atlanta shooters away from the 3-point line. For the quarter, the Hawks were held to just 33% shooting. Their four All Stars from last year were held to just 3-of-12 from the field, while they were led by utility man Kent Bazemore with eight points. The Cavs held a 30-19 lead after the first period, thanks largely to their prowess from long range. They came into the game leading all playoff teams in shooting from behind the arc, and continued that trend knocking down six threes to start the contest.

The Cavs continued their hot shooting in the second quarter, nailing three more from deep to maintain their double-digit lead throughout most of the period. LeBron led the way in the first half, scoring 13 points on 6-of-10 shooting from the field. Kyrie Irving, who came into the game leading all players in playoff scoring, scored 12 points in the opening half. The Hawks fought through the Cavs’ sharpshooting, keeping themselves within striking distance. The defensive game plan for the Cavs was effective in keeping their best scorers – Paul Millsap, Al Horford, and Kyle Korver – in check throughout the first half. Those three were held to just 2-of-17 shooting combined, but it was role players Bazemore and Dennis Schroder who hurt the home team. The two combined for 23 first half points, which was more than half of the team’s total. Even with their efforts, the Cavs led 51-41 at the half.

At the midway point of the third quarter, the Cavs appeared to be in total control, capitalizing on a run to take an 18-point lead at 72-54 with just over three minutes left in the quarter. The Hawks, led by the unlikely duo of Bazemore and Schroder, battled their way back into the game, though, finishing the quarter on a 16-3 run, to find themselves down just five at 75-70. The collapse by the Cavs opened the door for a nail-biting final period.

Leading by five and struggling to regain their rhythm, the Cavs saw their lead evaporate on an Al Horford dunk with eight minutes to play. Kyrie Irving found his game from that point, scoring the next seven points for the Cavs to bring some life back into the building. The rivals would trade punches until the four-minute mark, when with the Cavs down by one, J.R. Smith drilled a fade away three-point shot, and Kevin Love followed by drawing a foul on a deep shot, making two out of the three free throws. After blowing an 18-point lead, the Cavs had fought back to lead by four with three minutes left. After another stop on defense, the Cavs would demoralize the Hawks with two offensive rebounds and a LeBron James and-1 to put the team up comfortably at 95-88. When the dust settled, the Cavs finished the game on a 17-4 run to earn the win.

Game 2 is set for Wednesday night, and the Cavs will have to be focused and ready for a desperate Atlanta team. Hopefully, the win tonight has knocked off any rust that set in during the eight day layoff for the Cavs.