Despite the free agent market thinning out, the Cleveland Cavaliers earlier this week were able to hammer out a one-year, $2.1 million deal with former All-Star point guard Derrick Rose.

It was a decision that basically came down to deciding between Cavaliers and the Los Angeles Lakers, and he ultimately chose the former. During his introductory press conference on Wednesday afternoon, new general manager Koby Altman believes that Rose picked to play in Cleveland for one clear reason.

Koby on D Rose…"Derrick wanted to play in meaningful games, and is in a great space mentally..he came here for a chance to win"

The former league MVP had voiced that same sentiment on Tuesday in a team press release by stating that his sole focus is on wanting to win. The Cavaliers do provide him that unique opportunity as they have been the unquestioned best team in the Eastern Conference in the last three years with three straight NBA Finals appearance.

Rose made a huge commitment to passing up on more money elsewhere for the chance to compete for his first NBA title next season. He is coming off a productive campaign in his lone season with the New York Knicks. where he averaged he averaged 18.0 points on 47% shooting from the field, 3.8 rebounds, and 4.4 assists in 32.5 minutes per game

There are injury concerns with the 28-year-old given that his season was ended prematurely after playing in just 64 games due to undergoing his fourth separate knee surgery in his first nine years in the league.

Nonetheless, Rose has a huge opportunity to make a major impact in his first season with the Cavaliers on their quest for a fourth straight NBA Finals appearance and second NBA title in franchise history. 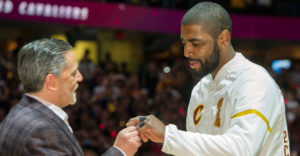