NBA free agency kicks off in less than a week, and while the Cleveland Cavaliers don’t have the cap space to make any major moves, they still have a few pending free agents of their own. One of these players is forward Marquese Chriss, who was acquired at the trade deadline from the Houston Rockets.

Chriss had some excellent moments for the Cavs, but for the most part struggled. Chriss is still young, and has a unique skillset and physical profile. He is worth keeping around for the right price, if only to see what John Beilein can do with him.

The big man was drafted eighth overall in 2016 by the Phoenix Suns, and spent two seasons in Arizona. He was named to the 2016-2017 All-Rookie Second Team after averaging 9.2 points and 4.2 rebounds per game. His sophomore campaign wasn’t quite as good, but the potential was clearly there. Chriss was a 6’10” 240lbs elite athlete trying to learn how to play basketball. Phoenix was rebuilding, so it seemed as if Chriss was in a great position to develop.

The suns didn’t feel the same way, choosing to package him with Brandon Knight’s large contract, sending the pair to Houston for Ryan Anderson and his equally abhorrent deal. Chriss now had a chance to crack the rotation of an NBA Finals contender.

He wasn’t able to do that, as he was active for only 16 games for the Rockets, playing just 6.5 minutes in each contest. He requested a trade, and Houston obliged, getting rid of him and Knight just months after acquiring both.

Marquese Chriss made an immediate impact in Cleveland, averaging 14.3 points and 6.3 rebounds while shooting 54% from the field and 56% from beyond the arc over his first four games with the team, including a 23 point performance against the Brooklyn Nets, punctuated by this devastating dunk over elite rim protector Jarrett Allen.

Unfortunately, after that outburst, Chriss would score double-digit points just once over the remainder of the season. Aside from a three-game stretch where he saw the court for about 15 minutes total, Chriss saw anywhere from 11-20 minutes per night, but he wasn’t able to take advantage of his role.

There are two words that perfectly describe Chriss; talented and inconsistent. It’s entirely possible that he will never come close to scratching the surface of his potential, but if a team is able to unlock his full talent, they’ll get something special. And that’s why Chriss is worth keeping around for Cleveland.

John Beilein was hired to develop young players. Chriss may be heading into his fourth NBA season, but he’ll turn 22 in early July. He is still very young, and on the same timeline as the Cavaliers’ young core. Beilein certainly has a much better chance at getting the most out of Chriss than any of the forward’s previous coaches.

Marquese Chriss would certainly have a role on the Cavs next season. John Henson, Kevin Love, Larry Nance Jr., Tristan Thompson, and Ante Zizic all need minutes at the four and five, but there is a decent chance that Henson, Love, and Thompson could all be traded at some point. Henson and Thompson are the most likely, but even before that happens, Chriss could carve out some playing time.

He can do that by working closely with Beilein to do a few important things. He must learn how to maximize his physical gifts. His size and athleticism give him mismatch potential for really any type of center, and his defensive potential is vast. Imagine a 6’10” rim protector who can bang around inside with throwback big men, but also switch onto guards on the perimeter without missing a beat. He must also limit his fouls and turnovers, as he tends to be rather careless in both aspects.

Next, he needs to find consistency on his three-point shot. His 26% mark from last season with Cleveland just won’t cut it. He’s shown he has the range on his jumpshot, it’s just a matter of knocking down those looks more often, because they will come. During his rookie season, he shot 32% from deep on 2.7 attempts per game. That’s more like it. Chriss has all the makings of the prototype power forward for today’s NBA; he is tall, long, athletic, can run the floor, and has three-point range. But even after three years, he’s still incredibly raw. Fortunately, the Cavaliers can afford to wait while he develops.

Chriss is an unrestricted free agent, since the Rockets declined his fourth-year player option. He should see what he is able to get on the open market, but there doesn’t seem to be very much interest in him, at least not yet. Signing him to the veteran minimum would be ideal, but the Cavs do have a $9 million mid-level exception, which they can divide up as they so choose. Dipping into that to give Chriss a two or three-year deal with a team option seems like a smart move. It would allow the Cavaliers to keep Chriss if he turns the corner, and easily move on from him if he doesn’t. It’s not like the team is going to need the minimal cap space he’d take up any time soon.

Cleveland is beginning a long and difficult rebuild, and because they aren’t a premier free agency destination, the Cavs need to build through the draft, and take risks on young players. Chriss is worth taking the risk on, and the possible reward could pay dividends for many years to come. 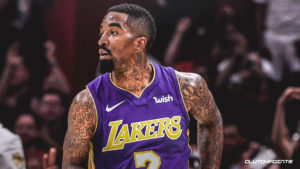 JUST IN: Report: JR Smith could wind up with Lakers after situation with Cavs is resolved
Related TopicsCavsFree AgencyMarquese Chriss