The Cleveland Cavaliers don’t have many free agents this year, but that doesn’t mean the few they do have aren’t intriguing. David Nwaba was a bit of a surprise signing last year, and now the Cavs must decide whether or not they want to keep him around long-term.

Undrafted in 2016 out of Cal Poly, Nwaba began his pro career as a member of the G-League’s Reno Bighorns, before being traded to the Los Angeles D-Fenders. He signed two separate 10-day contracts with the Lakers before being given a two-year deal. He played in 20 games for LAL, starting two. His offensive capability was lacking, but he showed great effort and excellent defensive ability. After the season ended, Los Angeles waived Nwaba, and he was claimed by the Chicago Bulls.

He played a full season in Chicago, starting 21 games. He was thought to be one of the best values on the free agent market, as he wasn’t likely to command a high salary and his defense would be valuable to any team. But the interest level from teams was low, and Nwaba remained a free agent until September 8th, when he signed a one-year deal with Cleveland for the veteran’s minimum.

Whether or not the Cavaliers were going to compete for a playoff spot, Nwaba was an excellent addition. At the time, the Cavs were short on guards and wing players, and Nwaba could give the team depth, versatility, a strong defensive presence, and veteran leadership. Injuries limited him to 51 games, but Nwaba had a solid season, averaging 6.5 points and 3.2 rebounds in 19.3 minutes per game. He scored a career-high 22 points in a loss against the Brooklyn Nets on March 6th.

David Nwaba didn’t often score at a high rate, but he was never relied upon to do that. His role wasn’t to create points, it was to prevent them. Cleveland’s starting backcourt of Collin Sexton and Brandon Knight was very poor defensively, and the same can be said about Sixth Man Jordan Clarkson and starting small forward Cedi Osman. Nwaba had to straddle defensive duties at both shooting guard and SF, where he is quite undersized at 6’4″. Nwaba lived up to his billing, as he was the Cavaliers’ best perimeter defender, and arguably their best defensive player overall.

The Cavs own Nwaba’s restricted free agency rights, so they will have the ability to keep him around no matter what. If last year is any indication, he shouldn’t have all that much interest from other teams, and Nwaba has expressed the desire to return to Cleveland, so it’s likely a deal will get done. The Cavaliers should try to sign him to a three-year deal, as no matter how the team finishes, he will be worth keeping on the roster.

If Nwaba is back though, his playing time is likely to drop. As of now, Cleveland has 18 players on its roster, including their two-way players and all three pending free agents; Nwaba, Marquese Chriss, and Nik Stauskas. Even without Nwaba and Stauskas, the Cavs will have a logjam in the backcourt, with Sexton, Clarkson, Knight, Matthew Dellavedova, and rookies Darius Garland and Kevin Porter Jr.

At the moment, both Garland and Sexton are expected to be the starters. Both players are 6’2″ and not exactly known for their defense, so things could get ugly. Nwaba would be useful as a defensive specialist to attempt to slow the bleeding at guard, and he would also see the floor at SF, where he would have only Osman and rookie Dylan Windler to contend with.

David Nwaba is certainly worth more than the veteran’s minimum he played on last year, but exactly how much more is the question. The Cavs have the taxpayer mid-level exception at their disposal, so the smart thing to do would be to divide it up between Nwaba and Chriss. Nwaba is more of a sure thing, so his deal would be structured differently than Chriss’s, but both are worth re-signing.

There will be plenty of moving parts for the Cavaliers over the next season, but Nwaba should be a fixture on the team. He has a specific role and he fills it well. On a team that will once again be one of the worst defensive groups in NBA history, Nwaba will be a valuable asset who head coach John Beilein would be glad to have. 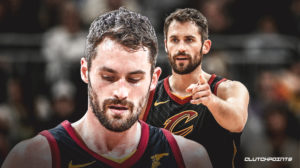