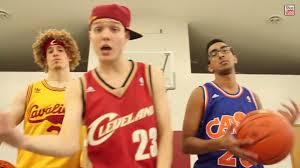 The Cleveland Cavaliers eliminated the Chicago Bulls from playoff contention last Thursday night to advance to the Eastern Conference Finals. The Cavs and Bulls have been in an great rivalry for a good seven years now, starting with Joakim Noah’s smack talking ‘The Land’ and continuing with the in-game confrontation in the playoffs during LeBron’s first stint with the Cavs.

That rivalry has even taken to the fans. YouTube user Froggy Fresh came out with a video after the Bulls took a 2-1 series lead. The rather confident group rapped out about Jimmy Butler being LeBron James’ father. We’ll let you see it yourself. We should warn you, it may be a little fun to see how confident these Bulls’ fans were:

Well, not three games later, the Cavs eliminated the Bulls in dramatic fashion: a Game 4 buzzer-beater, a narrow Game 5 victory, and a Game 6 blowout without Kyrie Irving as well as LeBron James struggling. Once the Cavs eliminated the Bulls, these Cavs fans came up with a great response with his own rap. In our opinion, YouTube user ShueTube killed it with this rap, but we’ll let you be the judge: