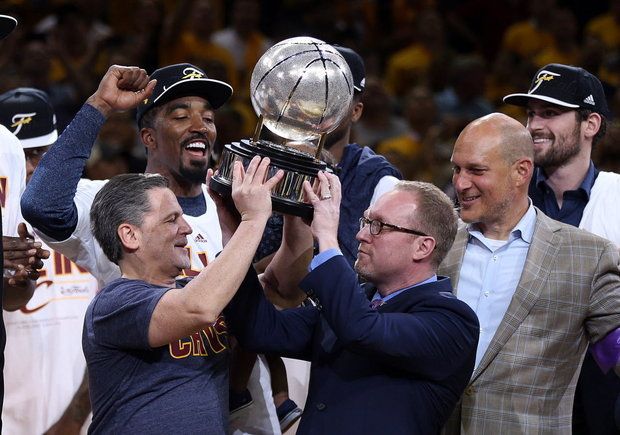 Now that the 2016-17 NBA season is over, Dan Gilbert, owner of the Cleveland Cavaliers, has a decision to make with regards to his general manager, David Griffin.

Griffin, who’s contract with the Cavs expired after last night’s loss to the Warriors in the NBA Finals, has yet to receive a new offer or extension. However, according to Sam Amico of Fox Sports Ohio and Amico Hoops, Gilbert is expected to present Griffin with a significant pay raise — and maybe even a new title.

Reportedly, Gilbert has said that he expects to meet with Griffin within the next few days — possibly as soon as Wednesday.

There were several teams keeping a keen eye on Griffin’s contract situation as the season neared its end, including the Orlando Magic and Atlanta Hawks. Both have since filled their GM vacancies, giving Gilbert and the Cavs a clean shot at bringing “Griff” back.

Griffin, the man who orchestrated the end of Cleveland’s 52-year drought by assembling what many consider to be the greatest Cavaliers team in franchise history, is well-liked by his peers and co-workers. In fact, Gilbert often credits Griffin for creating such a strong locker room environment.

Cavs superstar LeBron James has made it known — on several occasions — that he would like to have Griffin back.

“It makes no sense why (Griffin) shouldn’t get an extension,” James recently told ESPN. “He’s pulled every move. He’s tried to make every move happen, to better this team to be able to compete for a championship.”

Certainly, the Cavs will need to continue modifying the roster to remain competitive, and keeping Griffin is the architect of that evolving blueprint.