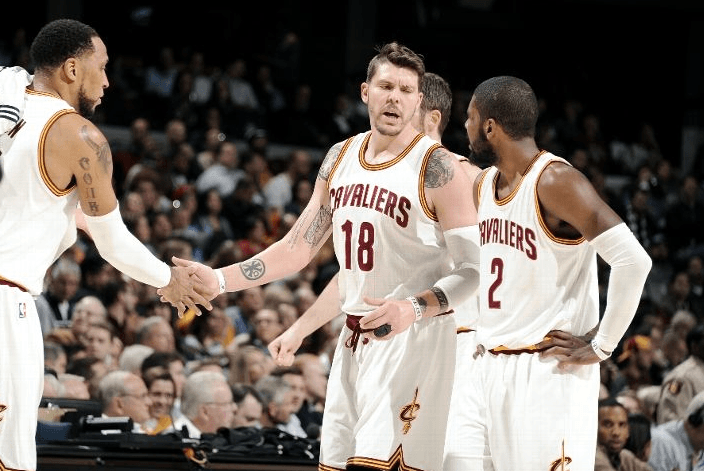 The Cleveland Cavaliers came into tonight’s matchup with the Denver Nuggets on a 4 game winning streak and were clicking in ways we haven’t seen the first 2 weeks of the regular season. They started their winning streak on the road against the Nuggets and Denver came in looking to end it, which is exactly what they did. The Cavs fell at home to the Nuggets 97-106.
Denver did everything right tonight and the Cavs simply couldn’t make a shot or get a stop in the 4th quarter when they needed it. Denver went on a run to extend their 4th quarter lead from 86-81 way to a 16 point lead midway through the 4th at 102-86, putting away the Cavaliers for good.

The Denver Nuggets looked ready for revenge as they came out strong in the 1st half and continued having their way in the 2nd half. Denver was sharing the ball throughout the game while the Cavs settled for isolations and long jumpshots. The ball movement displayed by Denver was something the Cavs could not stop in the first half, where the Nuggets missed a lot of their shots. It was clear, however, that Denver would eventually start making shots if Cleveland continued to allow those open opportunities and drives to the basket. With Denver’s open shots and the Cavaliers’ inability to score at certain points in the game, the Nuggets were able to pull away late while the Cavs were scrambling to recover.

David Blatt on if Cavs' players understand they're gonna get opponent's best every night: "If they don't, they'd better get it figured out."

Darrell Arthur and Nate Robinson came in and delivered the scoring punch that the Nuggets needed, scoring 11 out of the 13 2nd quarter bench points. For the Cavs, the bench did not provide much in the 2nd quarter, scoring only 4 points. The starters did most of the damage and kept them in the game. James, Love, and Irving scored 22 of the Cavs 26 points in the quarter (Irving had 11). Defensively, the Cavs still could not stop Denver from getting the shots that they wanted as they poured in 29 2nd quarter point with 3 more 3-pointers in the quarter to take a 1 point halftime lead.

Cleveland started the 2nd half the same way they started the first, slow and lacking defense on the interior and the wings. Denver capitalized on the lack of defense, inability to score, and the 6 Cavalier turnovers in the 3rd by scoring 12 points in the paint and another 3 makes from downtown, extending their 1 point halftime lead to 79-69 with 2:33 left in the 3rd. Just before the game got out of hand, Waiters came into the game and scored 4 points and assisted on a Tristan Thompson layup to trim the lead to 81-75 at the end of 3.

#Cavs had 6 TOs in first half. They have 6 just in 3Q. And now Tristan is shooting 16 footers. That kinda quarter

Waiters would score 7 of the Cavs first 9 points to start the 4th quarter, but he couldn’t help the Cavs stop Denver as they went on a 16 of the game’s next 21 points to increase an 86-81 lead midway through the 4th quarter to 102-86, putting away the Cavaliers for good. Through most of the 3rd and 4th quarters, Cleveland attempted a lot of isolation plays to try and score instead of moving the ball like Denver did. The Cavs had 9 second half assists and finished with 18 on the night while Denver had 11 and finished with 25 on the night. Denver had its way with the Cavs in the 4th quarter, pretty much scoring from wherever they wanted to.

David Blatt: "Honestly I thought the problem defensively started before the game. We didn't come with the proper mindset"

Cleveland also shot just 7-20 from the field and 2-10 from the 3 point line in the 4th quarter, not at all the same way they played last game where they scored 127 points, made 19 three pointers, and dished out 39 assists as a team.

The Cavaliers had 4 players in double figures and all 4 players scored 20 or more. LeBron James led the way with 22 points on 8-18 shooting with 9 rebounds, 5 assists, and 2 blocks. He also turned the ball over 4 times. James missed morning shoot around with a cold, but suited up anyways. Kevin Love scored 20 on 7-13 shooting while pulling down 11 rebounds and dishing an assist. Kyrie Irving put in 20 with 4 rebounds, 8 assists, and 2 steals, but had 4 turnovers as well. The final player was Dion Waiters who scored 20 off the bench along with 2 rebounds, an assist, and 2 steals.

The Nuggets had Ty Lawson with 24 points on 9-18 shooting with 12 assists and 2 steals. Arron Afflalo scored 23 points on 8-17 from the field, 4 rebounds, and 3 assists. Timofey Mozgov showed up tonight and double-doubled with 14 points and 11 rebounds. Darrell Arthur also had a double-double with 13 points, 11 rebounds off the bench, as well as 2 assists and 2 steals.

The Cavaliers referred back to their isolation, non-ball moving ways while not taking care of the ball offensively. But defensively, the Cavs were not quick to get to the shooters, they didn’t shut down the paint and paired with the poor offensive game, it ultimately resulted in the loss tonight. The Cavaliers next game is back at the Q Wednesday night against the defending NBA Champion San Antonio Spurs.