The Cleveland Cavaliers are in search of impact players in this year’s NBA Draft. The team desperately needs to add young talent, and they may do that by adding more first-round selections. If they end up pick in the mid-to-late lottery, one name who could be an option is North Carolina wing Nassir Little, a highly-touted player who wasn’t able to crack the starting lineup for the Tar Heels, but who possesses elite potential along with some instant impact on the defensive end.

Rivals.com ranked Little as the second-best player in the 2018 recruiting class, behind only R.J. Barrett and ahead of Zion Williamson. At 6’6″ 220lbs with a 7’2″ wingspan and a 38.5″ vertical, Little is about as NBA-ready as they come from a physical perspective. He is an explosive athlete who used his superior quickness to his advantage in college.

Much like Kevin Porter Jr., Little did not start, and wasn’t able to put up the numbers typical of a high lottery pick. He came off the bench in each of his 36 games, averaging 9.8 points, 4.6 rebounds, 0.7 assists, 0.5 blocks, and 0.5 steals, while shooting 48% from the field and 27% from beyond the arc. His scoring and rebounding numbers aren’t great, but he played just 18.2 minutes per game. Extrapolated to 40 minutes, those stats become 21.5 points and 10.1 rebounds. Not bad at all.

It may seem underwhelming that Little wasn’t able to start, but to be fair, he did have All-AAC and likely first-round pick senior forward Cameron Johnson playing in front of him. If he had gone back to school and improved some of his areas of weakness, he may have been able to put himself in the top-five discussion next year. This year, he’s likely in the 10-15 range.

As stated before, Little is a great athlete. He lives above the rim and is a devastating alley-oop and transition threat because of his speed and leaping ability. He combines this with an aggression that bodes well for his development as a scorer. He is an excellent slasher, primarily off of screens and curls, and finishes well at the rim.

He is a very good defender, with room to improve to elite status. He is often described as a “prideful” defender, meaning he values the defensive aspect of his game, and often volunteered to guard the opposing team’s best player. He is quick, long, and strong enough to guard four positions effectively. He is an active defender in space and can switch in the post at the very last second and use his leaping ability and long arms to contest shots.

Little’s shooting form is good and shouldn’t need too much tweaking, unlike other prospects. That coupled with his 77% free-throw clip gives hope that he can improve his shooting at the next level.

Shooting is the biggest issue with Little’s game. The majority of his points came at the rim, and he attempted only 52 triples on the year, hitting just 12 of them. He has to become a good three-point shooter, otherwise he will always be limited on offense. Oklahoma City’s Andre Roberson is a fine player, but his complete lack of an outside shot severely hampers the Thunder’s offense when he’s on the court. If Little isn’t able to become a 30%+ three-point shooter, he’ll end up being a longer, more athletic version of Roberson. That player certainly has value, but probably not as a top-15 pick.

While Little has great athleticism, he is not a major threat off the dribble. He lacks a tight handle and doesn’t have many dribble moves. For a player as dependent on slashing as he is, this is an issue. Little must become a better isolation player, and that includes both improving his dribbling and developing a pull-up jumper.

Perhaps the biggest reason why Little is not projected to go higher is because he is still incredibly raw. The physical tools are there, and his potential is clear. The question is whether or not he will be able to realize it. By all accounts he has a great work ethic, so effort should not be an issue. Collin Sexton had some similar issues coming out last year, most notably his three-point shooting, and the Cavs were able to help him along with that. New head coach John Beilein is known for his player development, and is assembling an excellent staff of assistants, so perhaps taking the risk on Little isn’t even that big of a risk. He’d give the team an excellent perimeter defender to start off with at the very least.

If Cleveland ends up trading with the Charlotte Hornets or Miami Heat for pick 12 or 13, Little could be a very intriguing option. With the new lottery odds in place already screwing the team over, the Cavs will have to hit a home run with a non-premium pick at some point, and Little could be their best chance to do just that. 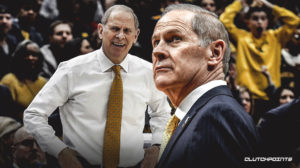