With all of the names the Cavs have been linked to this offseason, including Paul George, Jimmy Butler, Carmelo Anthony, and others, you would think the Cavs are in need of offensive threats. But they just ended the 2017 playoffs in a loss to the Warriors after the greatest and most efficient offensive performance total in playoff history. Offense is not the problem. The lack of any contribution whatsoever from the bench is what did Cleveland in. Specifically defensive help. Aside from LeBron James, the Cavs had absolutely no one who could slow down Kevin Durant, as he ravaged the Cavs for an average of 35 points per game. Durant’s presence also allowed the Warriors’ other stars to excel at times, compounding the problem.

Tony Allen could be part of the solution. Despite his advancing age(he’ll turn 36 during the season), Allen has long been one of, if not the league’s best perimeter defender. His relentless effort and tenacity on the defensive end made him invaluable to the Celtics’ 2008 championship team, as well as the Grizzlies’ playoff squads over the past few seasons. Offensively, he’s not much of a threat. In 27 minutes per game last season, he averaged 9.1 points on 46% shooting, while hitting just 28% of his three-pointers and 62% of his free throws, respectively.

While his offensive impact is unimpressive, there is a reason why Allen has made a name for himself in the NBA over the past 13 years; he really is an exceptional defender, even now. He has had success slowing down Durant when KD still played for Oklahoma City.

Allen wouldn’t have trouble finding playing time in Cleveland, as JR Smith right now is entrenched as the starting SG, but behind him, things are not so set in stone. Iman Shumpert has been involved in serious trade discussions, namely with the Houston Rockets. Other wing players such as James Jones, Richard Jefferson, Derrick Williams, and Dahntay Jones, all have up-in-the-air statuses. Allen would be a significant upgrade defensively over all of those named.

Allen also shouldn’t cost much. Reports are that the Grizzlies’ will only offer Allen the veterans’ minimum. This bodes well for the Cavs, as they could offer him the minimum or the mid-level exception, although that may be saved for a different player. If Allen will be making the same amount regardless, why wouldn’t he want to play for a contender and with LeBron James?

The Cavaliers desperately need bench depth and defense if they hope to have a chance at revenge against Golden State. Tony Allen would greatly help those chances. 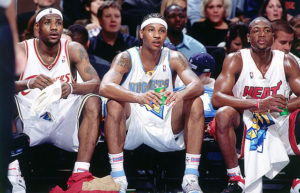 JUST IN: What the Cavs could look like with Melo or Wade
Related TopicsCavaliersTony Allen