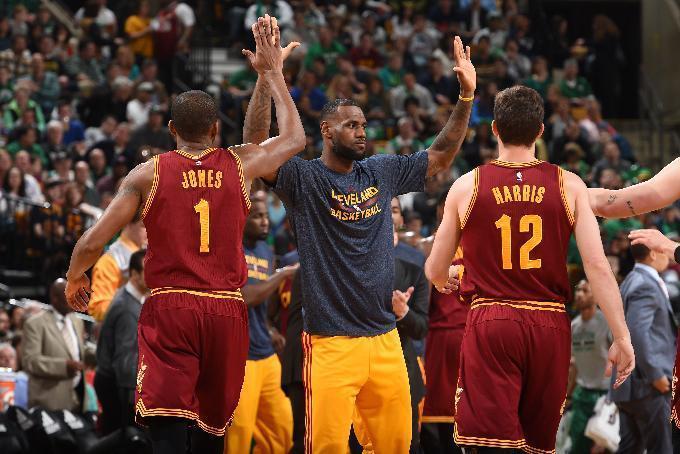 The Cleveland Cavaliers rested four of their five starters tonight against the Boston Celtics. LeBron James, Kyrie Irving, Kevin Love, and J.R. Smith all sat out tonight on the first night of a back-to-back set that started against the Celtics in Boston. Without their starters, Cleveland got blown out 117-78 in their final road game of the season.

The Cavs started out very slow tonight and continued that way throughout. Boston ran off the first nine points of the game from Avery Bradley and former Cavalier Tyler Zeller. Cleveland was able to get back in it thanks to the activity of Tristan Thompson early as Cleveland tied the game back up at nine apiece with six minutes remaining. Both teams exchanged baskets the rest of quarter and Cleveland actually took a five point lead at 18-13. Cleveland ultimately took a 22-21 lead at the end of the first.

Joe Harris getting some early burn and Cavs storm back to take 18-13 lead. Joe had 6 pts here at the Garden in 19 mins back in November

Cleveland got smacked to start the second quarter, as they made just 2-of-14 field goals and turned the ball over eight times for nine total points. Boston, on the other hand, was on top of their game as they got five steals in the quarter and made 14-of-22 shots for 34 points, taking a 55-31 halftime lead.

The Cavs only lost the second quarter by five points as the shots they were getting looked much better, but Cleveland clearly had trouble taking care of the ball, turning it over 16 times in 28 minutes of game action midway through the third. Boston’s active hands got them multiple steals and whatever shot they wanted on offense the rest of the game. Cleveland trailed 55-84 after three quarters of play and Boston outscored them 33-23 in the fourth to win the game 117-78.

Iman Shumpert led the way for the Cavs with 15 points, 10 rebounds, and three assists. Tristan Thompson had 14 points and five boards. Mozgov had nine, Marion had eight, and Delly had seven to complete round out the starters’ scoring lines. James Jones had 14 points off the bench, and Joe Harris also put in nine points.

This game can really just be overlooked as the Cavs had no rhythm without their starters and turnovers really put them away early. The only positive that came out of this was the bench gaining a little experience playing together, learning from their mistakes and how to better one another for the playoff run that starts in less than a week. David Blatt also relayed a similar message:

Coach Blatt on whether this helps in facing C's possibly in playoffs: you learn from every game and teams don't change that drastically..

Coach Blatt: I just wanted our guys to play hard. Almost not a fair situation to put them in, bec usually they aren't in primary roles

The Cavs outrebounded the Celtics 44-38, but were vastly outplayed in every other statistical department. The most glaring stat was the turnovers, as Cleveland gave the ball away 24 times en route to 36 Boston points off of those giveaways. A lot of credit is due to Boston too, as they were able to come up with a season-high 20 steals led by four apiece from Marcus Smart and Evan Turner.

Cleveland goes back home tonight for their final two games of the season against Detroit tomorrow (Monday night) and Washington (Wednesday night). With the loss, Cleveland, who has already locked up the second seed, is likely to face the Celtics in the first-round of the playoffs.

Coach Blatt on whether Indiana is upset Cavs sat guys: they weren't upset when we played them & we sat guys. Nature of the league.

Iman Shumpert hits the shot at the buzzer