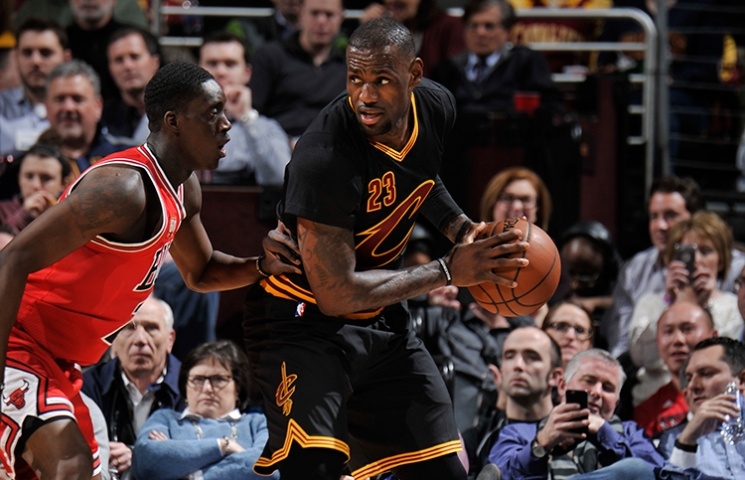 The Cavs looked fresh and hungry to finish the regular season strong as they beat the Chicago Bulls at the Q tonight for the first time in three tries this season, by the score of 106-95. Solid defense, a physical tone, and balanced offense were key to tonight’s win. The Cavs put 5 players in double figures, two finished with double-doubles, and the bench contributed 28 points to help maintain and grow the lead throughout the game. LeBron James scored 29 points, and had 9 assists and 9 rebounds, just missing a triple-double. Tristan Thompson and Kevin Love each had double-doubles, combining for 31 points and 25 rebounds between them. Kyrie Irving and Timofey Mozgov were the other players in double figures, with 19 and 11 points respectively.

The Cavs set a very physical tone on the defensive end and it translated to a very good start to this game. In the first quarter, they outrebounded the Bulls 17-9,and held Chicago to 8-26 shooting from the floor. LeBron started the game with the Cavs’ first 8 points, and finished the quarter with the same number plus two rebounds and two assists. Kevin Love was very active to start the game as well, tallying eight rebounds in the first quarter alone. The ball movement helped the team to get good shots on offense, as the Cavs recorded 11 assists on their first 16 made field goals.

The second quarter started off as more of the same for the Cavs, as they raced out to their biggest lead of the game at 43-26, thanks in large part to the play of Tristan Thompson. The Bulls would cut into the lead behind 18 first half points from Derrick Rose, which led all scorers for the half. The Cavs let up and did not end the half very well at all, allowing the Bulls to capitalize on a 16-5 run, bringing the score to 48-42 at the half. For the half, Tristan Thompson led the team with 12 points on 6-7 shooting. He added 8 rebounds as well. Kevin Love nearly took a double-double into the half as well, as he contributed 8 points and 11 rebounds. The Cavs defense only allowed the Bulls to shoot 18-48 for the half.

The Cavs came out hot to start the second half, piling on the lead with a 13-4 run. Much like the second quarter, the Cavs would pull away and this time build a lead as high as 17 points. The Cavs once again were strong defensively, not allowing a made field goal outside of the paint throughout the third quarter. On the offensive end they put up a game high 30-point quarter and were able to hold the lead at 14 going into the fourth, where they would hold on for an 11-point win.

The Cavs improve to 39-14 with the win, which leads the eastern conference by 3.5 games. The team is off until Sunday afternoon when they travel to Oklahoma City to face the explosive duo of Kevin Durant and Russell Westbrook of the Thunder. JUST IN: VIDEO: Taj Gibson Shoves J.R. Smith, But Smith Has None Of It