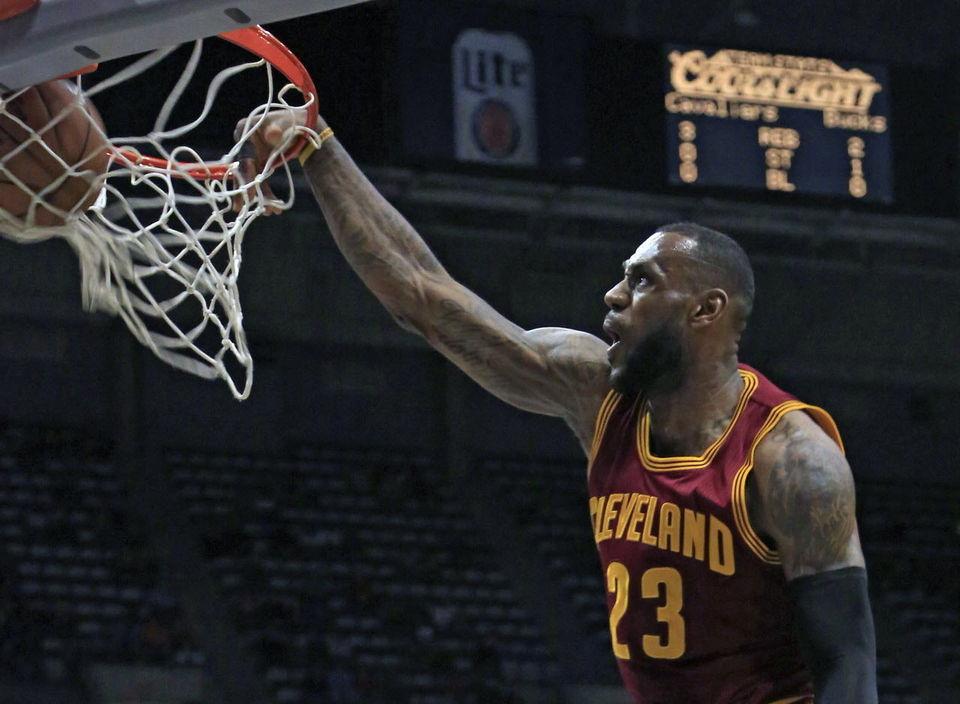 The Cleveland Cavaliers came into Milwaukee with one thing, or rather, one game, on their mind. Cleveland would secure the number two seed in the East with a victory over the Bucks or a Chicago Bulls loss. Coincidentally, both events happened as Cleveland defeated Milwaukee 104-99 and Chicago fell to Orlando 103-105.

The Bucks game out firing to start, taking a 6-0 lead, making their first four attempts, and hitting nine of their first 13 shots. The Cavs’ Big Three also came out ready, as they scored the first 15 points for the Cavs. Down 15-18, Cleveland went on an 11-2 run late before Milwaukee scored again, giving the Cavs a 26-22 lead after one quarter of play.

The second quarter started in a different direction the first, as both teams combined for just five points in the first four minutes. Although the exchanged baskets for most of the quarter, Cleveland was slowly able to extend their small four point lead into a double figure one at 53-42 before the end of the half. After two Zaza Pachulia free throws, Cleveland took a 52-44 halftime lead. Kyrie Irving had a great first half with 19 points, three rebounds, and six assists at the half.

Cleveland hit its first three shots and a pair of free throws to take their largest lead of the game at 61-46, looking like they’d put the Bucks away early. But back came Milwaukee with 12 unanswered points to get within 61-58. After four Cleveland points, the Bucks went on another run, this time nine straight, to take a 67-65 lead. The rapid change in momentum was not the first time Cleveland gave up a big lead in the past couple of months. But they responded immediately and scored seven points in the final minute to retake the lead at 74-72 after three quarters of play.

The fourth quarter saw both teams make tough shot after tough shot with neither really able to take a distinct advantage over the other. Cleveland was able to make the first run at 9-2, which was capped off by an incredible put-back dunk by LeBron James that gave the Cavs a 92-86 lead with less than six minutes to play. With a 97-89 lead, Milwaukee once again got back in it with a 9-2 run to get within two points. LeBron James however, came back and hit a step-back, game-sealing three-pointer to ice the game and send the Cavs to a 104-99 victory.

Even though Cleveland clinched the division and the second seed with the Bulls’ loss earlier in the evening, the victory was just the cherry on top of a great season that the Cavs are hoping to end on a high note with four games remaining.

Cavs have clinched Central Division & No. 2 seed in East. LeBron James has now been on division winner in 7 consecutive seasons.

Cleveland’s next game is Friday night at home against the Boston Celtics, the start of a home-and-home series that ends Sunday in Boston.

Timofey Mozgov looks to make a move in the post before finding the cutting LeBron James for the wide open throwdown!

On the second, Kyrie Irving gets by his defender and finds LeBron James cutting once again for the slam dunk!

Iman Shumpert misses the three-pointer from the corner and with no one on the weak side to rebound the ball, LeBron James takes to the skies to catch the ball and throw down the dunk!

A Look At The Cavs Playoff Rotations

With the Cavs up two, LeBron James steps back over Jared Dudley and hits the fade-away three-pointer to ice the game for the Cavs