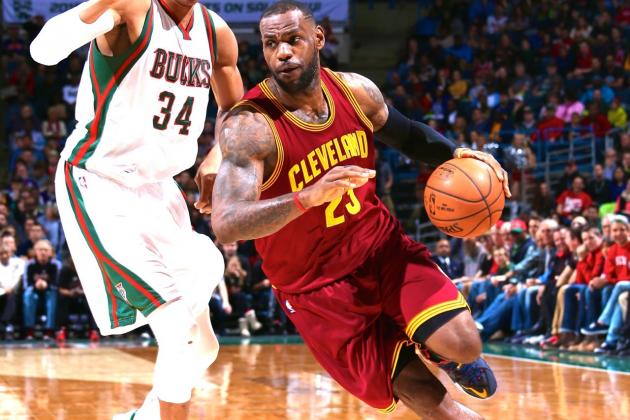 The Cleveland Cavaliers won their third straight game this afternoon against Milwaukee, defeating the Bucks 108-90. The two teams were neck-and-neck for most of the first half and despite trailing by nine at halftime as well as 11 early in the third, the Cavs were able to take their own double-digit lead in the fourth quarter and put the Bucks away. Cleveland had three players score at least 20 points tonight.

The Cavs got off to a rocky start down 7-to-nothing and played from behind most of the first quarter. They used an 14-3 run however, capped by an Iman Shumpert three-pointer, to take a 25-22 lead with just under two minutes remaining. Two baskets by Michael Carter-Williams gave the Bucks a 26-25 lead after one quarter of play.

The Cavaliers really did a horrid job defending the paint as all 12 of the Bucks field-goals were within 10 feet. Nine of those field-goals were layups, while the Cavs had jsut five made-field goals at the rim. The Bucks aggressiveness going to the basket resulted in some free throws. They were able to go on a 13-5 run to take a 53-44 lead into halftime.

Cleveland came out firing on all cylinders to start the third quarter, making five straight field goals and six-of-eight to get within 60-63. Milwaukee used a good team effort to regroup and lead 69-62, but a 13-4 run by the Cavs led by LeBron James (three layups, one assist) to take a 75-73 lead into the fourth quarter. Cleveland outscored Milwaukee 31-20 in the third quarter.

Including the run from the third quarter, the Cavs used a 26-5 run that continued well into the fourth quarter to take a 93-78 lead with just over six minutes remaining. J.R. Smith and LeBron James caught fire in the fourth as they scored Cleveland’s first 18 points in the fourth quarter (Smith with 11, including three threes, and LeBron with seven). They didn’t stop there as James and the Cavs kept pouring it on the Bucks and wound up winning by 18, 108-90. It wasn’t the first time they trailed by double-figures in the second-half and came back to win. They did so most recently against the Spurs last Thursday on Kyrie’s 57-point night. The Cavs held the Bucks to 17 fourth quarter points while scoring 33 themselves. Mr. Cavalier Austin Carr said it best:

Cavs defense on a different level in second half

LeBron James led the way with 28 points, 10 rebounds, six assists, and five steals. J.R. Smith caught fire from behind the arc, knocking down 7=9 from three and 8-11 overall for 23 points, four rebounds and three steals. Kyrie Irving also scored 20 points on 9-19 shooting with three rebounds and seven assists. Timofey Mozgov played just 22 minutes and had 10 points and three rebounds. Kevin Love struggled the most tonight as he scored nine points on 4-13 shooting with three rebounds and two assists in 29 minutes of play. Iman Shumpert scored 10 points off the bench, who combined for 18 (Dellavedova with five and Thompson with only three). Those box-score stats didn’t show everything though:

Cleveland shot 50% from the field as a team and 41.9% from three, both solid numbers. They also had 14 steals on the night. They shot just 11-16 from the free-throw line (68.8%), but that was due to Tristan Thompson’s horrid 1-6 night from the line. The bench scored just 18 points, which is something they’ll have to improve upon as the playoffs approach.

The Cavaliers, now a full 20 games above .500 at 46-26, have two days off before they continue their road trip at Memphis on Wednesday night. That game will be a huge test to see how the Cavs have improved their game compared to a fellow powerhouse team. 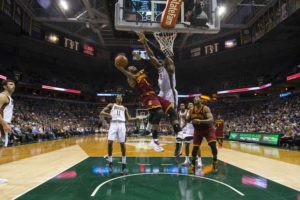 JUST IN: VIDEO: Kyrie Irving Puts on Dribbling Exhibition And Finishes At The Rim