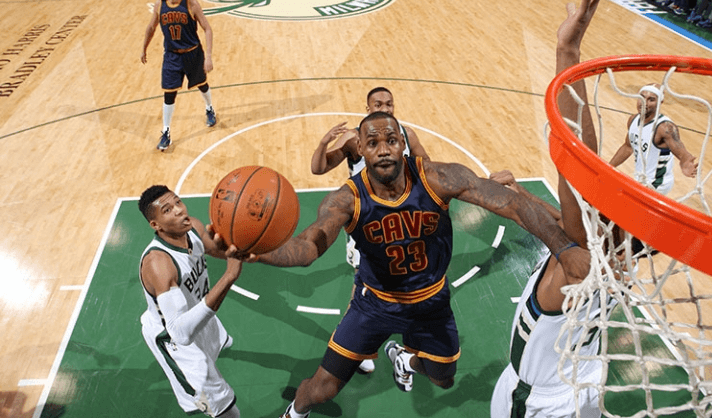 The Cavs 8-game win streak has come to an end after a grueling double overtime loss tonight in Milwaukee. Cleveland battled back from an 11-point fourth quarter deficit to get to the first extra period, but weren’t able to close out the pesky Bucks. For the most part, the Cavs did not play well, but once again locked in on defense in the fourth to mount the comeback.

LeBron James was his usual self, but this time he got some late game help from veteran Richard Jefferson. The 12-year vet and first year Cavalier scored 10 fourth quarter points and sparked the Cavs comeback with his energy and defense just as much as his offense. LeBron continued his late game offensive barrage, scoring 21 of his game-high 37 after the third quarter.

The Bucks played hard all night, and we’re effective defensively. While the effort and the defense are expected, the Bucks also managed to show some good signs on offense as well. Their balanced effort was the difference in the game, as they put six players in double figures, with none scoring more than 17 points. They were physical and scrappy and earned the right to win the game.

The Cavs had their chances too though. With four key players – Mo Williams, Timofey Mozgov, JR Smith and Matthew Dellavedova – combining to shoot 7-30 for the game, it seems unrealistic that Cleveland would be in contention at all. It is still early in the season, but the Cavs are showing that they have another gear defensively. Tonight was no different. They held the Bucks to 38 second half points, which gave them a chance to win both in regulation and in the first overtime.

Kevin Love was the only Cavalier starter to play well, scoring 24 points and grabbing 12 rebounds. The double-double marked the 300th of his career. Even with the strong numbers, Love faded late in the game. He subbed out at the end of the 3rd quarter with 23 points, and only managed another free throw in overtime. The only other Cavaliers in double figures were Jefferson with 14, and JR Smith with 10 despite his poor shooting.

The good news for the Cavs is that they did not play well at all, and even on the second night of a back-to-back on the road against a young, hungry Bucks team, they had a chance to win. Tests like this are good for the long-term well being of the team, and there is plenty to build off of even in a loss like this one. The team has two days off before meeting the Pistons in Detroit on Tuesday night. They’ll be needing some rest after this one.