Cavs To Add New Scoreboard To The Q 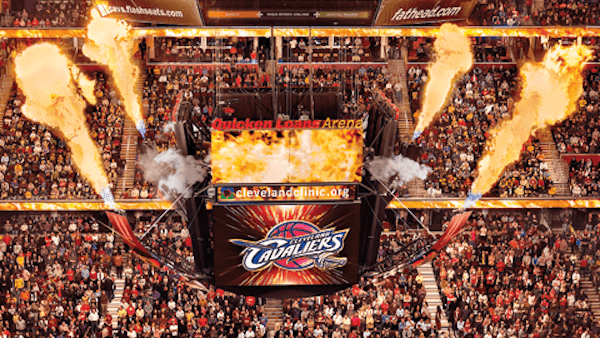 It was unknown as to whether or not the project would get done, but it appears the Cleveland Cavaliers will be providing fans with a brand new high-definition scoreboard for the upcoming season.

Kevin Kleps from the Cleveland Crain’s reported that the Cavs are planning on hoisting a brand new $10 million scoreboard before the 2014-2015 regular season tips off. This will add a great atmosphere within the Quicken Loans arena, adding an even better in-game experience than they’ve come to know. During this past weekend’s Black Key’s concert, which was held at the arena, the space formerly filled by the flame-throwing scoreboard of old is now vacant and looks to be ready for construction. The scoreboard is only a significant part of renovations being added to The Q. In addition to the scoreboard, the Cavs are seeking a new roof, an improved security system, a video production control room and a new sound system for the The Q’s bowl.The team is also reportedly going to be featured on the in-arena 3-D projection throughout the course of the season.

With all these upgrades, the anticipation for the season to begin is unbearable. Hold onto your seats Cleveland fans, this is our year. The Cavs are scheduled to host Maccabi Tel Avi in a preseason game on October 5th and play their regular-season opener against the New York Knicks on October 30th.