The preseason has finally begun for the Cleveland Cavaliers, so it’s time to take a look at the roster for the upcoming campaign. Up next is combo guard Brandon Knight, who was added to the team at the trade deadline back in February. His role in 2019-2020 is unknown due to the influx of young talent that Cleveland has added to the backcourt, but Knight will get his chances.

The Cavs acquired Knight in the three-team trade that sent Alec Burks to the Sacramento Kings. He had been a member of the Houston Rockets, but was inactive for the first 26 games of last season while recovering from a torn ACL that cost him all of 2017-2018. He ended up playing in 12 games for Houston, but quickly fell out of the rotation.

Knight has had an interesting NBA career. He was drafted in 2011, the same year that the Cavaliers selected Kyrie Irving and Tristan Thompson. Many advocated for the team to select Derrick Williams first overall, and nab Knight at four. What a disaster that would have been.

Knight spent two decent seasons in Detroit before being dealt to Milwaukee, where he played in 124 games, averaging 17.9 points and 5.1 rebounds per game. He was then traded to Phoenix during the 2014-2015 season, and signed a five-year $70 million contract with the Suns.

He averaged 19.6 points per game in 2015-2016, but since then, injuries have robbed him of consistent playing time, and a good deal of explosiveness. He’s been relegated to a salary dump, which is why the Rockets had to part with their 2018 first-round pick (which ended up becoming Dylan Windler) to get rid of him.

In Cleveland, Knight ended up starting alongside Collin Sexton, playing 27 games. His minutes were mostly consistent, but his play wasn’t. He averaged 8.5 points, 2.3 assists, and 1.9 rebounds in 22.9 minutes per game. He shot 41% from the field and 37% from beyond the arc. He scored double-digit points in just nine games, and reached five assists four times. With Jordan Clarkson locked in as the sixth man, Knight was the natural choice to play shooting guard, but that will not be the case this season.

The Cavs now have six players in the backcourt who need to see the floor. Knight certainly won’t be starting, and he could end up at the bottom of the food chain. He won’t be with the Cavaliers long-term and is not as valuable or as good a player as Clarkson or Matthew Dellavedova. If rookie Kevin Porter Jr. starts out in the G-League, then maybe Knight could have a decent role. But if KPJ’s preseason debut is anything to go by, that won’t be happening.

But even with those reasons, Cleveland still has incentive to play Knight, if only to showcase him for other teams. He may have been a pretty poor value for his contract, but he is now in the final year of that deal, meaning he can help a team create over $15.6 million in cap space for next summer. If Knight can show he is capable of being a solid bench scorer, his value will only increase, and the Cavs could net more in a trade.

Brandon Knight is almost guaranteed to be traded at the February deadline, but until then, it will be interesting to see what role John Beilein has for him. Even if he is trade bait, he’ll have to play.

Just how much remains to be seen. 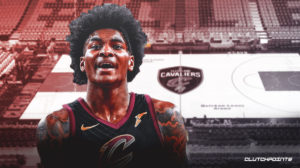 JUST IN: Why Cavs’ Kevin Porter Jr. could end up being the steal of the 2019 NBA Draft
Related TopicsBrandon knightCavs