Cavs 10 Most Defining Moments Through 50 Games 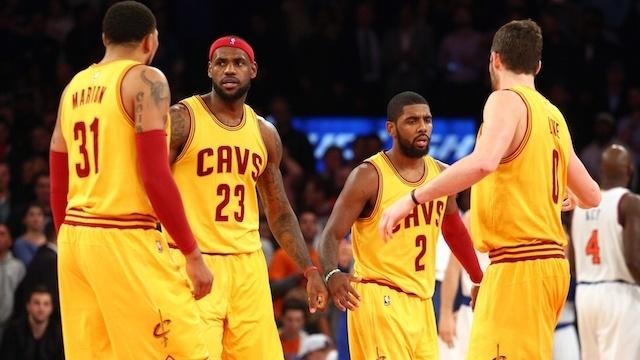 The Cleveland Cavaliers are now 50 games into the 82-game season. They have been to extreme highs and lows already as we saw them defeat league powers while also succumbing to bottom feeders. Some players transitioned to new roles while others tried to get rid of old habits. From chemistry to coaching issues and even talks of LeBron bolting Cleveland one more time, the Cavs have seen a lot this “early” and no team has grown before our eyes in a 50-game span the way the Cavs did. Through the hard fought victories and the unexpected losses, here are the 10 select games that help sum up the first 50 games of the season for the Cavaliers. We start from the beginning of the season:

After a monumental off-season headlined by LeBron James` homecoming, people finally got to see the new material. The season opener. New uniforms. Elaborate preparations within The Q and around the city. Epic player intros. The tip-off. Everyone was pumped up and the atmosphere was electric, to say the least.

The Cavaliers started off with a lot of energy and despite the Knicks being able to stay within striking distance, the Cavs` confidence was still evident. However, the defense slowly fell apart as the Cavs became witness to the Knicks making one open jump-shot after another. Signs of the team`s lack of cohesiveness also became evident and miscommunication was everywhere.

Cleveland lost this one and it was an overview of a grueling start to the season. The Cavaliers` first trashing of the season was dealt on the road by the Trail Blazers. The team had another great start, scoring 34 first-quarter points, only to relinquish it afterwards and never fight back.

LeBron James took only 12 shots in this game and he looked to defer to his teammates for the most part; he had poor body language and an alarmingly low level of interest. Most people interpreted James` surprising gesture as him teaching a lesson of sorts to his young teammates, particularly Kyrie Irving and then-Cavalier Dion Waiters, that breaking up with their old bad habits is the first step to them growing as integral pieces within the team. The Cavaliers were on the heels of a 3-game winning streak when they met up with the Hawks. The Q was a mad house as the Cavs lit up from behind the arc en route to a record setting night. Cleveland hit all of their 9 three-pointers in the first quarter for a league record and they went on to hit 11 straight. They ended the night hitting a Cavalier record 19 treys.

The ball movement was a thing of beauty as they had 39 assists on their 49 made shots. They also did a masterful job containing Kyle Korver, who entered the game averaging 16.1 points but ended the night scoreless. The game was a stunning display of the Cavaliers’ offensive potential and the fans were on a high. Good times are starting and the Cavs are rolling, or so they thought. Frustration had started to build up within the team as the Cavs had lost three straight. The Cavaliers still got off to a hot start as they built an 18-point lead early but saw the Raptors scratch through it and come away with a lopsided victory. Everyone at The Q had their hands on their faces.

The starters did their work to build the huge lead only to see the bench fail to sustain the early momentum. This game, more so than ever, exposed another one of Cleveland’s weakness which was the bench. The Raptors reserves, led by Lou Williams’ career high 36 points, outscored the Cavalier bench 51-19.

To cap off another embarrassing night on their losing streak, LeBron James had some words about the team, “We’re a very fragile team right now, we were a fragile team from the beginning.” LeBron James returned to Miami as a member of the Cleveland Cavaliers on Christmas Day and the atmosphere was fit for the holiday. His former teammates welcomed him back to his old floor with open arms and the Heat organization prepared a video tribute for James. However, it seemed that the friendly atmosphere and the absence of the Heat’s leading scorer, Chris Bosh, caught up on LeBron.

He failed to assert himself early and this led to the Cavaliers playing catch up for the entire game. Dwyane Wade capitalized on the Cavs playing possum as he scorched the rim in the first half while Luol Deng played a LeBron-like game finishing with 25 points, eight rebounds, and eight assists.

The King still finished with an efficient line of 30-4-8 but his effort came too late as the Heat had established their confidence early in the game. The Cavaliers, who missed LeBron James for roughly two weeks, came off a highly disappointing 10-game stretch where they only managed to win a game. Everyone’s morale is at an all-time low so Coach David Blatt thought of the most unique way to spend their practice hours. He surprised the team by taking them bowling.

It looked like the plan worked as the Cavs managed to get a win against Kobe and the Lakers. This game featured another Kobe-LeBron duel and everyone paid close attention as they knew that these matchups are now numbered with Kobe nearing the twilight of his career. James got the better of the matchup as he finished with 36 points, five rebounds, and five assists against Bryant’s 19 points, six rebounds, and career-high 17 assists. Kevin Love toughed it out in the fourth quarter after injuring his back with key contributions.

Some people were not overly impressed with the win because it came against a struggling squad, but they had no idea that this was the start of something special. 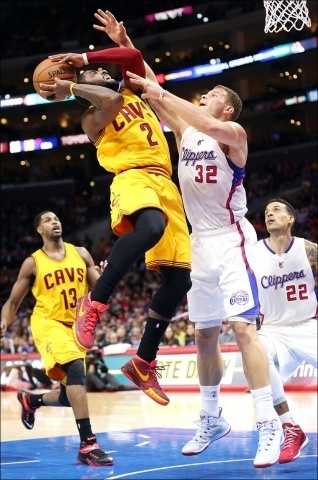 This game featured the Cavaliers’ 2011 draftees, Kyrie Irving and Tristan Thompson, who were matched up against two premier players at their positions in Chris Paul and Blake Griffin.

Kevin Love missed this game with a bad back leaving Thompson on his own against Blake Griffin and the Canadian power forward, despite allowing Griffin to score 34 points, played his heart out scoring 24 points, grabbing 12 rebounds, and blocking two shots. While Kyrie had his way against CP3 with an excellent all-around game as he notched 37 points on 12-18 shooting with five three-pointers, four rebounds, assists assists, three steals, and a block. The fourth-year players were absolutely making their fantasy owners cry tears of joy.

It was a closely fought contest and the Cavs’ game-winning play was not only genius, but it also silenced Coach David Blatt’s critics when. For what seemed to be the first time, LeBron James emphatically acknowledged his first-year coach after drawing up an excellent out of bounds play off a timeout to seal the victory. 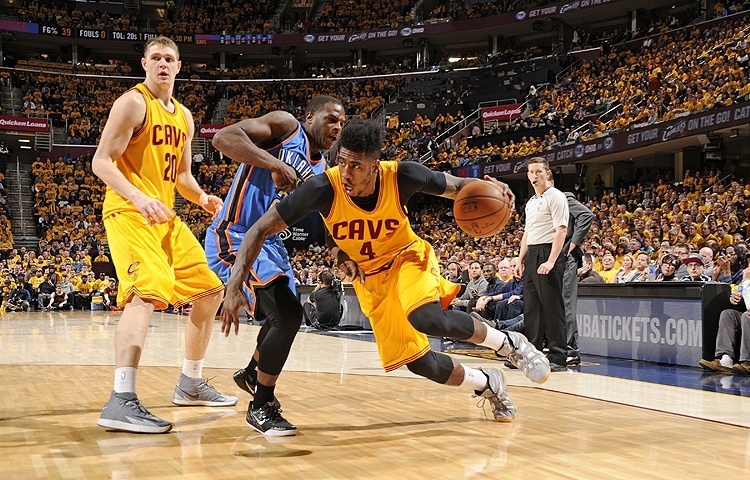 After being traded to Oklahoma City, Dion Waiters returned to The Q to the go up against his former Cavalier teammates. A lot of people eagerly awaited this matchup as the storylines were aplenty. The main bill was still about LeBron James taking on Kevin Durant and these two did not disappoint leading their teams with 34 and 32 points respectively.

Dion Waiters surprisingly got his share of boos from the crowd while the new top shooting guard of the Cavs, J.R. Smith, was splashing three-pointers from all over the place. Kyrie Irving also got the better of Russell Westbrook limiting the wily Thunder guard to a poor 7-26 shooting from the field.

This game had a playoff atmosphere in it especially with The Quicken Loans Arena crowd looking like a sea of gold in their gold-colored shirts. Suffice to say, it was a golden win for the Cavs as they extended their winning streak to 6 games.

With LeBron James sitting out this game due to sore wrists after a hard fall the previous game, the Cavaliers’ winning streak was clearly in danger against a tough Portland team. Kyrie Irving, however, had other things planned. 55 of them to be exact.

The flashy point guard had a career night, scoring 55 points and drilling a Cavalier record 11 three-pointers. He also had the game winning dagger to give a fitting end to a historic night. Irving’s scoring output eclipsed the previous league high of 52 set by Klay Thompson and Mo Williams. He was simply in control for the entire game as he scored at will against any defender the Blazers sent out to try and stop him.

Uncle Drew wasn’t only scorching the hoops; he was also making Damian Lillard bleed for his points as he only managed to put up 14 points on a dismal 4-19 shooting. Ultimately, this game secured Kyrie’s campaign for an All-Star selection this year. LeBron James already had his return to Miami. It was Kevin Love’s turn to visit Minnesota. Love played six years as the Wolves’ franchise player only to find zero success as far as the winning goes. The player who was the centerpiece of the trade that brought Love to Cleveland, Andrew Wiggins, seemed to have an edge playing against the Cavs and that mentality was on full display that night.

The future went up against the present as Wiggins stood toe-to-toe with LeBron. It even overshadowed Love’s much-anticipated return to the Target Center floor as Wiggins gave his all, impressing with an array of athletic moves while James bullied his way to the basket reminding the rookie sensation that he is still The King. Wiggins and James both shot 14-25 from the field. The rookie had 33 points to go along with four steals while James scored 36 points along with six rebounds and five assists.

Cleveland came away in the fourth quarter to pull off a convincing win and extend their winning streak to 10 games.