Cavaliers: The best trade offer the Boston Celtics can make for Andre Drummond With the NBA trade deadline fast approaching, the Cleveland Cavaliers have approximately one week to trade center Andre Drummond. There have been plenty of teams with rumored interest, including the Boston Celtics, who are in the midst of an extremely disappointing, treading water as the sixth seed at 20-19, just a game-and-a-half from being out of the playoffs. Does Drummond make sense for Boston, and what would a potential trade package look like?

Robert Williams, Tristan Thompson, and Daniel Theis are the Celtics’ big men at the moment. None of them stand over 6-8, and none are averaging over 9.4 points or 8.4 rebounds per game. Boston needs a spark, and perhaps that could be Drummond. Or not, but a motivated Drummond playing smart basketball and not being force-fed the ball on offense, leading to terrible shot selection can be an effective contributor to a team that was supposed to be an NBA Finals contender.

Let’s address the two elephants in the room first. Drummond’s $28.7 million salary this season makes any potential deal rather difficult because there really aren’t a lot of bad contracts out there currently. Drummond also does not carry much trade value in a vacuum, so if the Cavs can get literally anything for him, that should be considered a win for them. Other teams know this, so they won’t be willing to part with much.

Next, we’ll lay out the untouchable players for Boston. None of Kemba Walker, Jaylen Brown, Marcus Smart, Jayson Tatum, Thompson, Romeo Langford, Aaron Nesmith, Grant Williams, Payton Pritchard, Semi Ojeleye, and Carsen Edwards are all probably considered off-limits, and this makes a trade practically impossible. Drummond’s salary almost fits into the $28.5 million Gordon Hayward trade exception, but not quite. This leaves no feasible way to match salary without Boston giving up one of its higher-paid, and therefore better, players. Using the TradeNBA.com trade machine, this is the best offer that Boston can make that actually works:

Does this help either team in any way? Aside from bringing Thompson home and adding another young guard, it doesn’t do much for the Cavs.  But at the very least, Langford could be flipped for something else. He didn’t play much as a rookie and wasn’t very good when he did see the floor. He has yet to play in 2020-2021 due to his presence within the league’s mysterious health and safety protocols. Bringing Thompson back as frontcourt depth isn’t a bad idea, and the team would certainly like to have him in the locker room once again,

For the Celtics, this makes very little sense. They lose their backup point guard and three rotational frontcourt members to bring in Drummond for the stretch run. Would he have a larger impact than the combination of Thompson, Ojeleye, and Theis? His ceiling is certainly higher than those three combined, but his floor is much lower. There is a ton of inherent volatility with Drummond, as Cavs fans are well aware. He’s a very inconsistent player, with great highs are ugly lows. Is he a player that can function as a fifth scoring option, with the majority of his touches coming on rebounds? Perhaps he could. But he’s never played in that role; he’s always been an offensive centerpiece that piles up volume stats. He’s never been a terribly efficient scorer and was shooting a career-worst 47% from the field before being shut down.

If the Celtics were desperate enough, maybe they would make a last-ditch deal like this. There aren’t a ton of teams equipped to deal with a throwback big like Drummond; the Brooklyn Nets lack size, for instance. Coincidentally enough, Drummond’s three most efficient games this season came against the Milwaukee Bucks, Brooklyn, and the Philadelphia 76ers; the top three seeds in the Eastern Conference. Perhaps he could replicate those performances against one of those teams a few times during a seven-game series, especially with better talent around him.

The deal doesn’t really help Cleveland, but it’s not like Drummond is helping the team right now, and if he held any sort of significant trade value, he would have already been moved. He hasn’t played in more than a month, and if he isn’t moved by the deadline, he’ll almost certainly be bought out. If that happens, the Celtics would be able to make a run at signing him, but would of course need to contend with other teams for Drummond’s services. Would they be willing to make an offer like this in order to bypass the free-agent courtship and risk losing out on him? Only time will tell. 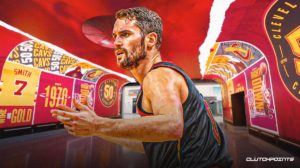