After his first professional win—Beilein previously coached in the college ranks for West Virginia and Michigan—the head coach called the moment “special” and was doused by his players along with being presented the game ball by general manager Koby Altman.

Per Chris Fedor in cleveland.com:

“We’ve got a new era of Cavaliers basketball led by Coach Beilein,” Altman said. “Let’s give it up for his first win.”

“Excuse my appearance, I just took a little bath and I didn’t think it was coming,” Beilein said. “We’re always going to celebrate every win. We’ve worked hard and it’s been a long summer and September to get to that first win for these guys and our coaching staff. Really feel great.”

“I’m very fortunate to have a lot of game balls, but this one’s going to be pretty special,” Beilein said. “It’s an NBA ball, No. 1. But any time you change jobs like this, it’s a very difficult time on your family, on you and everyone, it’s such a transition. It will be special.

“I know it will be among the basketballs that I really cherish that I currently have. I don’t know where I’m going to put ‘em some day, but that one will find its way to being seen.”

Cleveland’s hire of the widely respected college coach signaled a new era for the Cavs — one where the team is rebuilding and leaning into young players such as guards Collin Sexton and Darius Garland. 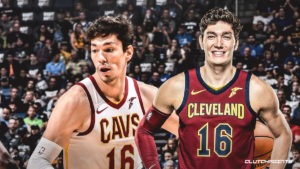