The Cleveland Cavaliers will try to keep pace with the surging Philadelphia 76ers in the race for third place in the Eastern Conference standings when they travel to New York on Monday to take on the Knicks as sizable betting favorites on the NBA odds at sportsbooks monitored by OddsShark.com.

Cleveland enters the final three days of the NBA regular season trailing the third-place Sixers by a single game in the standings, but can clinch home-court advantage in the first round of the NBA playoffs with a straight-up victory in Monday night’s Cavaliers vs. Knicks betting matchup at Madison Square Garden.

The Cavaliers have enjoyed an impressive stretch run, going 10-2 SU over their past 12 outings, but slipped back of the 76ers in the standings with a 132-130 loss in Philadelphia as 3.5-point underdogs on Friday night.

The 76ers followed up with their 14th straight SU win on Sunday afternoon, a 109-97 victory over the visiting Dallas Mavericks as 13-point favorites, and can lock down third place with victories in their final two contests, including Tuesday’s visit to Atlanta and a home date with Milwaukee in Wednesday’s season finale.

The Cavaliers’ tenuous position in the standings has failed to shake their hold on top spot on the Eastern Conference championship odds, where they maintain their perch as +105 betting favorites. However, the 76ers have emerged as the fastest movers on the conference futures, rocketing to +700 after trailing at +2200 in late February.

While Cleveland will need a little help from the Hawks and Bucks in their respective upcoming dates with Philadelphia, third place in the East does not sit far out of the Cavaliers’ grasp. With a 1.5-game lead over Indiana, Cleveland sits poised to claim a fourth straight Central Division title, which would give it the tiebreaker edge should the club finish the campaign deadlocked with the Sixers.

Pulling even with the 76ers likely means posting SU wins in their upcoming home-and-home series with the Knicks, which concludes at Quicken Loans Arena on Wednesday night. However, the Cavaliers have enjoyed considerable success in recent dates with the Knicks, claiming SU wins in 11 of 12 meetings, according to the OddsShark NBA Database, including a 104-101 victory as 5-point chalk in their last visit to MSG on November 13. 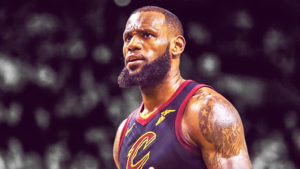