The Cleveland Cavaliers will look to bounce back from a decisive 98-79 loss to the Miami Heat when they close out a three-game road trip Wednesday against the Charlotte Hornets as narrow 1.5-point favorites on the NBA odds at sportsbooks monitored by OddsShark.com.

The Cavaliers’ defeat in Miami also drops them to a middling 4-3 SU in seven road dates, and leaves the club with a precarious grip on third place in the Eastern Conference standings, just a half-game up on the red-hot Philadelphia 76ers.

Charlotte’s offense has been firing on all cylinders during a five-game SU win streak, tallying 120 points per game, including a spectacular 140-79 win over the visiting Memphis Grizzlies on March 22 that marks the most points the Hornets have scored since setting a franchise record with a 141-124 win over the Los Angeles Lakers in November 1993.

The Hornets followed up with another impressive offensive performance in their last outing on Monday night, posting a 137-128 overtime victory over the New York Knicks as 11-point home favorites, and own a 6-2 SU record in their past eight home dates.

However, Cleveland has dominated the Hornets in recent years, racking up outright wins in 12 of 13 meetings since the start of the 2014/15 NBA season, according to the OddsShark NBA Database, and has claimed victory by an average margin of nine points in three straight SU and ATS wins in Charlotte.

The Cavaliers will enjoy a day off Thursday before opening a four-game homestand on Friday against the New Orleans Pelicans, and close out the weekend with a Sunday matchup with the Dallas Mavericks.

Cleveland is a dismal 4-10 SU and 5-9 ATS in 14 meetings with the Pelicans, including a 123-101 loss in the Big Easy as a 2-point underdog on October 28, but has won and covered in their past two tilts at Quicken Loans Arena.

The Cavaliers have also taken five of six overall from Dallas, but have covered just once in the Mavericks’ past five visits. 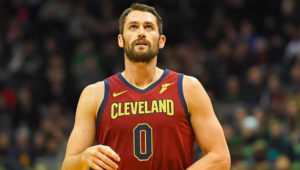