It didn’t take long for the NBA to react to the Cleveland Cavaliers’ decision to rest their Big 3 Saturday night for their nationally televised game vs. the Clippers on ABC.

Just seven minutes after the decision was made public, Cavs GM David Griffin says he received a call from the league office.

When did the league call? Griff: "Seven minutes after it was announced. Yeah, they were not happy."

This is the second weekend in a row that star players were held out for rest of a game on ABC. Last weekend, the Warriors did the same thing holding out Steph Curry, Klay Thompson, Draymond Green and Andre Iguodala when they took on the Spurs, who also rested a few players.

It’s an increasing trend in the NBA that feels like a problem for everyone involved. On one hand, the players have to deal with a brutal schedule full with plenty of back-to-backs and long road trips. We have learned more in recent history how valuable rest can be for players during the season so coaches, who are paid to win championships, are trying to take advantage of this tactic as much as possible.

The NBA wants to work to avoid this as much as possible. It’s already been moving in a direction to limit the number of back-to-backs and make the schedule less strenuous. But it wants to make money as well so having players rest, especially for nationally televised games, is not a good look for it. Griffin said after the game, “They’re paying me to win a championship.”

Griffin maintained that the situation last night was a little different than what the Warriors did the week before.

Griff: "We literally had 1 guy rest tonight & everybody else was reasonably injured. I don’t feel like we did anything terribly egregious."

Love and Irving were being held out due to injury concerns and Cavs head coach Tyronn Lue said he didn’t want to have LeBron play solo.

“He wants to play,” Lue said of James before the game. “He was mad, but I just thought for him it was the right decision — not to go out there and try to carry the whole load by himself and playing more minutes. I just think getting those two back tomorrow and getting on the same page is good for us, instead of just trying to play him when Kevin can’t play in a back-to-back and Kyrie can’t play in the back-to-back.

“So it’s tricky. He’s pissed, but it’s my decision, it’s the medical staff’s decision, and that’s what we came up with.”

Resting LeBron James and Kyrie Irving last night afford the two stars two days off in a row now. The Cavs lost by 30 last night and the Celtics are just a game and a half back of the top seed in the Eastern Conference now. But that rest still seems to be viewed as more valuable in the long run, and home-court has not mattered for LeBron in the East for the last six years anyway.

This will be an on-going discussion within the league until it stops. Resting feels like it is here to stay as an effective tactic and will only really go away if the schedule drastically changes. 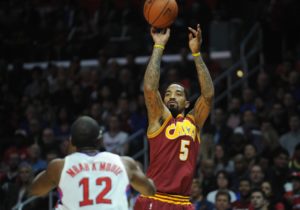