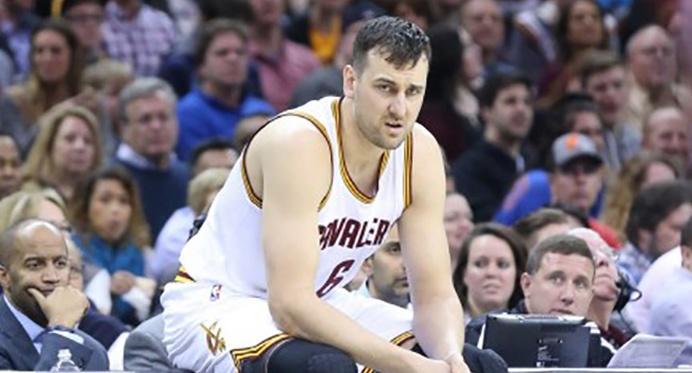 Prior to Monday, most fans of the NBA’s defending champion Cleveland Cavaliers thought their beloved team’s roster was set for this year’s playoff run and title defense. With J.R. Smith and Kevin Love on the mend, things were looking up.

The Cavs, who are currently sat atop the Eastern Conference standings with a 42-20 record, decided to bring in several new faces before and just after this year’s trade deadline, including Kyle Korver, Derrick Williams, Deron Williams, and most recently, Andrew Bogut. As previously mentioned, things were looking up for the Cavaliers.

However, in the second quarter of Monday night’s home game against the Miami Heat, the Cavs took a hit to their postseason front-court plans. Down seven points, Associate Head Coach Larry Drew, who was at the helm in place of an illness-ridden Tyronn Lue, inserted Bogut into the lineup. Within seconds, the Australian-born seven-footer went down with a leg injury.

After being helped to the locker room by Tristan Thompson and James Jones, Bogut underwent X-ray scans, which later showed a broken tibia bone in his left leg. Bogut was then sent to Cleveland Clinic for further evaluation and confirmation.

Now, the Cavaliers are faced with a decision. According to multiple reports, Bogut is expected to be waived by this weekend. During today’s episode of “Talkin’ Cavs” on WHBC Cleveland with Kenny “The Road Man” Roda, Sam Amico of Fox Sports Ohio and Amico Hoops reported that the Cavs will likely look to bring in another veteran big man.

There are still a few “bigs” who are both playoff eligible and available for General Manager David Griffin and his Cavs, including Anderson Varejao, Luis Scola, Larry Sanders, and Jared Sullinger.

Sanders, who last played for the Milwaukee Bucks during the 2014-15 season, was recently invited to Cleveland for a workout session with the Cavs and could be considered a front-runner for a contract offer. There were quite a few analysts who thought the talented rim protector would be a great fit in the Cavaliers’ system, but for whatever reason, he seemed to fall off of their radar after Bogut reached a contract buyout agreement with the Philadelphia 76ers.

For now, who the Cavs will elect to bring in can only be speculated on. As always, keep your browsers locked on Cavs Nation for more information as it becomes available.