Cavaliers’ Arena To Be Used For Republican Presidential Debate

Quicken Loans Arena is home to the Eastern Conference Champion Cleveland Cavaliers. Tonight, it will be the host arena for the Republican Presidential Debate, where 10 candidates including Donald Trump, Jeb Bush, and Scott Walker will each be giving their opinions on some of the nation’s most pressing matters.

The organizers of the debate got quite the creative idea, according to Ashley Parker of the New York Times:

To keep the debate on schedule, the Fox team was also discussing a possible alternative to the usual gentle ding sound that signals that a candidate’s time has expired: the actual shot-clock buzzer used during Cleveland Cavaliers basketball games, which are played at the same arena.

“You could make it about synergy in that arena: Use the very same buzzer that LeBron James hears on the court when the shot clock runs out,” said Mr. Baier, who had come up with the idea over dinner Tuesday night at a local bistro. (“I was inspired,” he said with a smile, “by a beer.”)

One of the co-hosts of the debate, William Bret Baier, started it off by letting the crowd know sarcastically how they should react to tonight’s responses:

“We have a big crowd with us tonight in the home of the Cavaliers. And while we expect them to be enthusiastic, we don’t want to take anything away from the valuable time of the candidates. So we’re looking for somewhere between a reaction to a LeBron James dunk and the Cleveland Public Library across the street.” 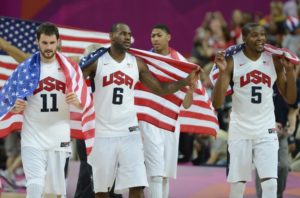