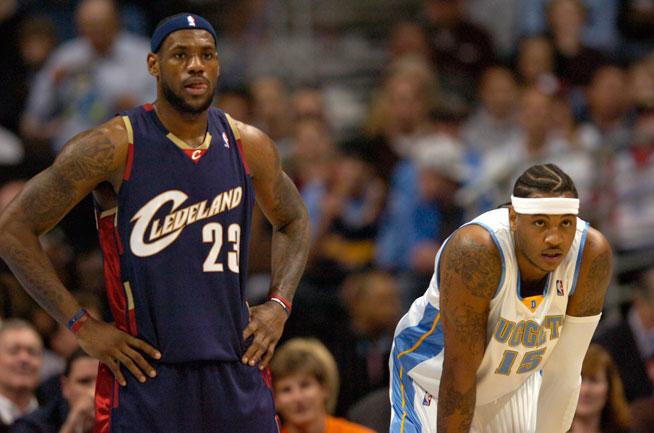 The 2014 NBA offseason was headlined by some of the best players in the league entering free agency. Players like Luol Deng, Chris Bosh, Dwyane Wade, Lance Stephenson, and Pau Gasol all gauged lots of interest from numerous teams, but their destinations weren’t solely in their hands. Many top tier free agents weren’t ready to commit to any team until two even higher tier free agents made their respective decisions. Those players are Carmelo Anthony and LeBron James. Although many free agents knew where they wanted to play right away next season like Marcin Gortat with Washington, Tim Duncan with the Spurs, Kyle Lowry with the Raptors, Dirk Nowitzki with Dallas, and Zach Randolph with the Grizzlies, most of the NBA was waiting on James to make his decision (expected first), followed by Carmelo’s decision.

On July 11, LeBron James made his decision in a letter published by Sports Illustrated. Creating a notion of hope and redemption with the title “I’m Coming Home,” LeBron showed just how important his hometown was to him as well as his desire to represent Cleveland and Ohio, a gesture that allowed even the most bitter Cavaliers fans to understand and forgive James. Having the best player in the world doubled the Cavalier franchise value and increased the team’s chance to win a championship twenty-fold.

Not long after, Carmelo Anthony leaned towards resigning with the New York Knicks for what was reported to be just a little under the max contract offered to him. Staying in what he called home, Carmelo wanted to experience the free agency process but through it all, realized his heart as well as his family was in New York. On July 13, a mere two days following James’ decision to return home, Anthony made his return to the Knicks official, and thus began the rebuilding-around-Melo era.

Continue the article on the next page!

{adinserter 2}In a recent interview with retired New York Giants’ defensive end Michael Strahan, Anthony was asked how LeBron James’ decision to return home to Cleveland affected his own decision to stay in New York. Anthony gave a surprising answer, saying he believed that it was the exact opposite: that James made his decision based on Carmelo’s choice to stay home. How did Carmelo’s decision affect LeBron’s when James was not only in a vastly different situation, but he also made and announced his decision prior to Carmelo? Well, the only comparisons that can be made are that both Knicks fans as well as Cavaliers fans are wildly passionate about their respective superstars, and both were more than ecstatic about their returned to the cities they called home. Indulging in Anthony’s oxymoronic theory, James may have seen that passion in the Knicks fans that he knew Cavaliers fans would exceed if he decided to leave the Heat for them.

But Carmelo Anthony just came off a very disappointing season with the Knicks. Other than his surreal 62-point performance at Madison Square Garden, the Knicks had a rather forgetful season. Having not even made the playoffs in the 2013-14 season with a record of 37-45, New York looked to enter a rebuilding phase with Phil Jackson as the President of Basketball Operations. Anthony ultimately decided that he loved New York and had faith in Jackson’s ability to build a contender.

James is once again a Cleveland Cavalier with a team that will compete for a championship for the very near future. The arrival of Kevin Love, the improved, ready-to-lead Kyrie Irving, and new head coach David Blatt will bring Cleveland the success they’ve so desperately missed since James last left.

Carmelo Anthony is a New York Knick again, and is starting fresh with a new supporting cast, new coach in Derek Fisher, an infamously successful new system in the Triangle Offense, and new president in Phil Jackson to surround him with the necessary talent to succeed. Both have a lot of work to do until they’re able to compete for a championship, but both Carmelo and LeBron have what it takes to succeed in their respective home teams. James would not be Cavalier had it not been for the Finals loss and Cleveland’s position to add the necessary talent. Anthony would not be a Knick had he not forced his way out of Denver to New York, a place he would soon call his beloved home.

Coincidentally, Carmelo Anthony and the New York Knicks will open their season in Cleveland against LeBron and his Cavaliers. We’ve seen the drama between these two titans in the offseason; now, we will wait to see who can lead his ‘hometown’ to victory in the Q.