Bulls In Pursuit For Love 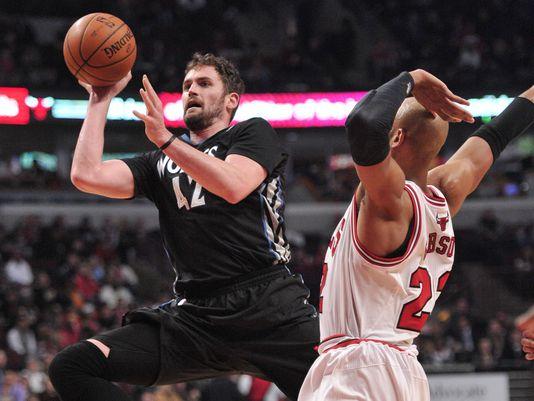 The Chicago Bulls join in on the pursuit for Kevin Love. The Bulls join the Cleveland Cavaliers, Golden State Warriors, Denver Nuggets, Boston Celtics and Phoenix Suns, in trade talks with the Timberwolves to acquire three-time all star power forward.

The Bulls have plenty of young talent to offer the Timberwolves which include Taj Gibson, Jimmy Butler and future draft picks as their main assets in the deal, according to Marc Stein and Brian Windhorst, NBA analysts for ESPN.

Earlier today, Adrian Wojnarowski of Yahoo Sports reported the Cavs were looking to acquire non-guaranteed contracts to facilitate in a deal with the Timberwolves. Those reports merit truth as the Cavs recently struck a deal with the Utah Jazz to acquire three non-guaranteed contracts in exchange for shooting guard Carrick Felix, a future second round pick and $1 million.

In Murphy, Lucas and Thomas, Cavs get three non-guaranteed contracts to facilitate trades — or a trade. Another step toward Kevin Love. — Adrian Wojnarowski (@WojYahooNBA) July 22, 2014

This is the smaller deal Cavaliers have been pursuing in recent days to try and roll into the larger scope deal with Minnesota.

{adinserter 2} According to USA Today, it appeared the Cavs were set to sign first overall pick Andrew Wiggins. That deal may have to wait a little longer because the Cavs can’t trade Wiggins for 30 days after he signs his deal.

Even though the Cavs have collected tradable contracts to acquire Love, it is still unclear if they are steadfast on their pursuit of Love. Other players such as Marc Gasol or Al Horford could be solid plan B options for the Cavs if a deal with the Timberwolves doesn’t work out.

The Cavs off-season has been one crazy roller coaster ride but buckle-up Cavs fans, the ride has yet to reach its peak.