Bronny James Lighting Up The Court Like His Dad Check out LeBron James Jr.’s Top 10 Moments On The Court!

We have all seen the talent level and abilities of the best player on the planet in LeBron James. He’s recently passed Allen Iverson for 27th on the NBA’s All-Time Scoring list with 24,383 and is eyeing Ray Allen at 24,505 career points. But the highlights of the day do not go to James or the Cavs, but rather to his son Bronny, who at 10 years of age, is putting up a show of his own in whatever leagues he’s playing in. Here are some of the impressive highlights from the fourth grader at the John Lucas All-Star Weekend event:

LeBron James Jr., or Bronny, is ranked the number one fourth grader in the country per MSE (Middle School Elite rankings) based on his ability to perform at high level tournaments and basketball camps, as well as the team’s overall success and the player’s ability to have an impact on that team.

Check out LeBron James Jr.’s Top 10 Moments On The Court!

LeBron James posted this picture on his instagram after yesterday’s game against the Knicks:

Congrats Bronny and your teammates on winning the championship in New Orleans. You, Bryce and Z are my heros!! #JamesGang #StriveForGreatness 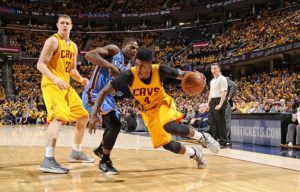