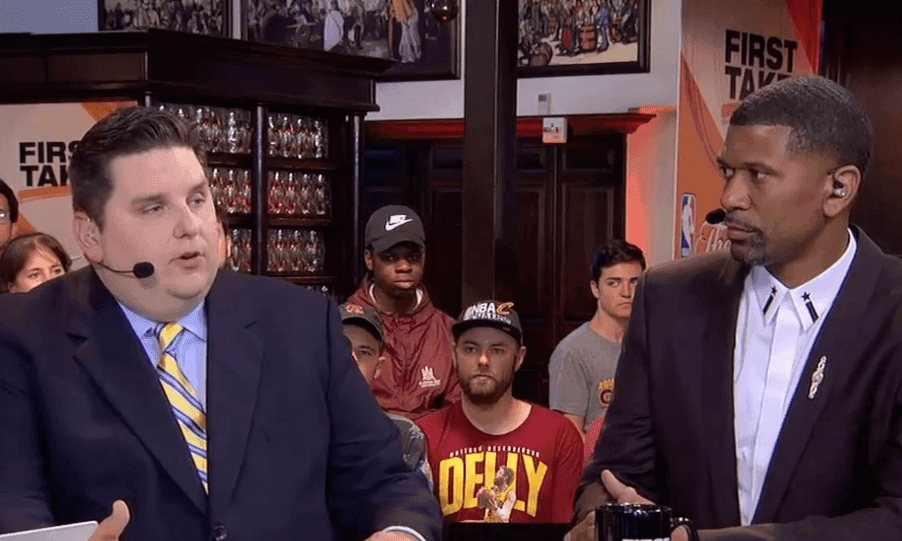 ESPN’s Brian Windhorst made a guest appearance on 850 WKNR yesterday to discuss the current state of the Cleveland Cavaliers. As most fans of the team know, the Cavs have been through the ringer with trade talks so far this offseason. In his wide-ranging interview, Windhorst discussed the departure of David Griffin, what assets the Cavs have given away, Cleveland’s loss to the Golden State Warriors in this year’s NBA Finals, and the rumor of LeBron James heading to the Los Angeles Lakers after next season. In a rather stern manner, “Windy,” as Windhorst is known, set the record straight on several fronts.

Via Brett Zelman of clevescene.com:

“Of course (giving up the assets) was justified. Because the moves, even though you don’t want to go backwards, the moves got you the Championship. This core team got you the Championship. This team got you to the Finals this year. If it were easy to win Championships year after year after year, you would do it. But what I’m saying is, the Cavs had to make decisions to put themselves in the best position to win, and they did that. And as a result, they do not have many more maneuvers to make. That’s just reality. But I’m telling you, they are very happy with the move that they made and they’re very happy with the position that they’re in right now. The window for them and the way for them to be able to improve their roster is narrow, but it’s narrow because their team is so good. And yes, everyone would love for them to be able to go out there and trade Iman Shumpert for a guy that’s better and would be able to guard Kevin Durant, but those moves aren’t available to them. Of course it’s not ideal but that’s reality. And the situation is, they’ve been to three straight Finals! Why do you think that three straight Finals doesn’t happen very often? Why do you think there’s never been three straight years of the same teams playing each other in the Finals? Because it’s really, really hard to maintain a team that’s good year after year after year. And this is hard that’s happening. It’s not a failure, it’s just a reality!”

When it comes to James’ future with the Cavs, Windhorst says that nobody knows what the three-time champion will do after next year. Windy also pointed out the fact that Kyrie Irving and Kevin Love will be heading into the final year of their contracts, which will likely play a role in James’ decision.

“But even if the Cavs had gone 82-0 this year, it was still going to be an issue with Kevin Love and Kyrie Irving next year, because that’s the nature of the NBA…I really want to slap Cleveland upside the head. You have a SENSATIONAL team here. You have a team that’s been to the Finals three times. You have a great chance to get to the Finals next year. Enjoy next year and see how things develop after that! Stop focusing on the transactional stuff that’s a year away; focus on the transactional stuff of today. There of course are pressures, but some day, LeBron is going to leave. Some day Kyrie Irving is going to leave and some day Kevin Love is going to leave. Those things are going to happen. But the goal for the team is to extend the window as long as possible and the moves that they have undertaken over the last several years have got the window wide open. They still have a great chance to win the Championship next year. You don’t know how healthy the Warriors are going to be! You don’t know if they’re going to be able re-sign all of their dudes. You don’t know if there is going to be some issue that’s unforeseen. That’s why you do it. And that’s the position the Cavs are in. The Cavs are NOT in a terrible position; they’re in a wonderful position! Do not lose sight of that! It’s really short-sighted and small-minded to not recognize how good of a position they’re in. I mean, teams are out there right now, offering the sun, the moon and the stars to move up into the lottery. Why? So that they could dream of one day getting their hands on a player like Kyrie Irving. My goodness, you have (Kyrie)! Celebrate that you have him!”

Windhorst is right on the money with his remarks. While it’s true that their window may be closing, the Cavaliers still have a great chance to win a championship as they are currently constructed. Let’s not forget the fact that their core group has made three consecutive trips to the Finals. Just about anything can happen in this league. We’ll just have to wait and see how next season unfolds.