With the Heat loss on Saturday night, Miami has fallen two-and-a-half games below the Boston Celtics and Brooklyn Nets, who are both locked up at 37-42. Here’s a look at the lower half of the East Playoff race. Cleveland, the number two seed with home-court advantage throughout the first two rounds, will face whoever finishes seventh. 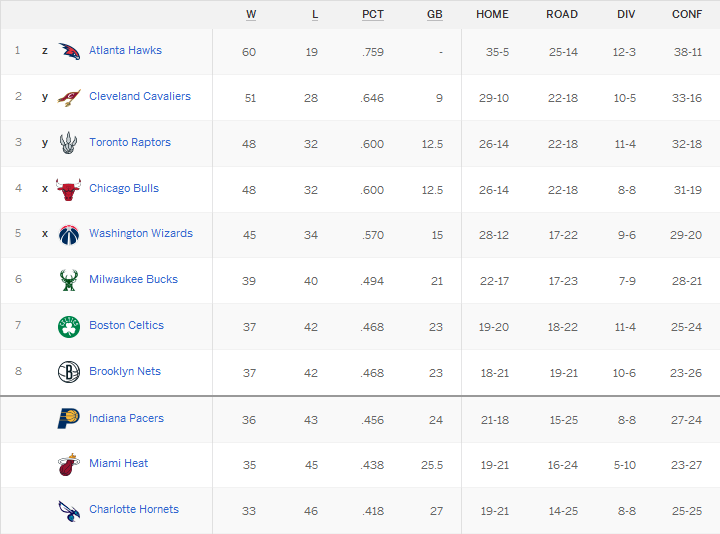 Miami is just about out of the playoff race, even though not technically. But they’ll have to win both of their remaining games, and then they’ll have to count on Boston, Brooklyn, and Indiana losing their final games of the season just to have a chance to squeeze into the playoff picture, which seems unlikely.

Here are the remaining games for the four teams fighting for the seventh and eighth seeds: 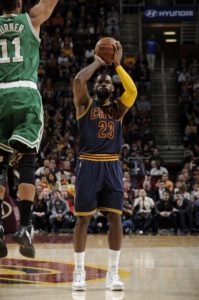 LeBron James is expected to rest Sunday against Boston, and with Irving as well as Shumpert questionable with injuries, Boston is likely to win that game and get one step closer to securing the seventh seed and a chance to face the Cavs. Boston also holds their season series tiebreaker over the Nets, which will allow them to finish ahead in the standings should they have the same record come Wednesday night.

Although they won’t openly mention it, Cleveland would welcome a first-round series against a Celtics squad that has just about no playoff experience throughout their young roster. Only Gerald Wallace, Brandon Bass, Jae Crowder, and Evan Turner have past playoff experience, and only Turner and Crowder are considered key guys on the court for the Celtics. With little playoff experience on hand, the Cavs should be able to take down the Celtics in five games, and the series should not go beyond that.

“I try not to worry about what other teams are doing and the leads or whatever the case we have,” said James during practice earlier this week. “Just going to try to continue the progress we have been making. We’ve been playing some really good ball. We still make some young team mistakes – hopefully we can get past those very soon. The way we’ve been playing ball for the last two months has been a thing of positive and we can go off of that.”

Brooklyn could essentially be Cleveland’s first round matchup if they’re able to thwart both Chicago and Milwaukee, both of whom are still trying to secure their playoff spots. Brook Lopez hasn’t taken part in a playoff game since losing the seven-game series to the Bulls back in the 2012-13 season, but has been hot in the past month, playing in all 16 games and averaging 23.5 points, 9.3 rebounds, 1.1 assists, and 2.2 blocks while shooting 58.5% from the field. A low post threat like Lopez would definitely make things harder for the Cavs, but Timofey Mozgov should help make life tough for Lopez. If Cleveland were to face Brooklyn in the first round, we predict Cleveland taking the series in five or six games. 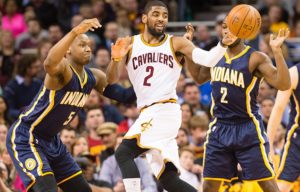 Indiana is not out of the playoff race by any means, and they would easily be the most dangerous lower-seeded team in the East should they make the playoffs. Indy has got their core back, and Paul George, who is still playing on a minutes restriction, is showing very little signs of rust for a guy who missed eight months of pro basketball. Factor in the all around game of David West as well as Roy Hibbert, who always plays extremely well against LeBron James-led teams, and Cleveland would be in for a tough series that we’d predict them winning in six or seven games. Given their opponents over the final three games in Oklahoma City, Washington, and Memphis, it seems unlikely that Indy will move up any higher than ninth place.

It ultimately comes down to whether or not Cleveland loses Sunday, as that will have big playoff implications. But it’ll be either Boston, Brooklyn, Indiana, or (miraculously) Miami. 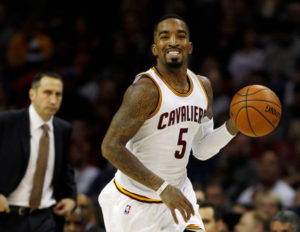