The Cleveland Cavaliers had never won an NBA Championship. The city of Cleveland hadn’t won a title since 1964. That all ended on June 19, 2016 when the Cavs won the NBA Championship and ended years of disappointment.

The Cavs were nominated for numerous ESPY awards for Wednesday night, and have already won their first. The Cleveland Cavaliers won the award for Best Moment of 2016, winning the title after coming back from a 3-1 deficit, defeating the best regular season team in NBA history, and ending the drought in Northeast Ohio.

Cleveland winning its first title in over 50 years earns them the #BestMoment! #ESPYS pic.twitter.com/6BVehYk8Q4

The @cavs win the ESPY for best team. They were 1st Cleveland team to win major pro sports title since 1964 Browns pic.twitter.com/1elwvKMu4X

The Cavs are expected to win a couple more awards on the night, stay tuned for the latest on the Cavs at the ESPY’s. 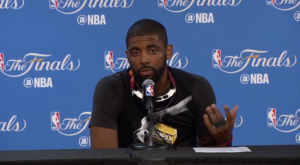