The Cavs have been in the market for a power forward/center who can defend the rim, and it seems like they’ve found their man for the right price.

During the Cavs Summer League opener against Milwaukee, Tyronn Lue spoke with the NBA TV hosts calling the game and revealed that the Cavs had picked up Andersen.

According to a team source, the Cavs are "working on" signing Chris "Birdman" Andersen, as Ty Lue alluded to on @NBATV

Andersen’s last stint was with the Memphis Grizzlies, but he played with LeBron James and the Miami Heat where he won a championship in 2013 and reached the Finals in 2014. He’s a great, defensive-minded replacement for Timofey Mozgov. Birdman is close with LeBron since their days in South Beach and it makes a lot of sense to bring his tenacity and hustle to the Cavs.

The details of his contract have not been announced yet, but Andersen will be joining the Cavs for the 2016-17 season. 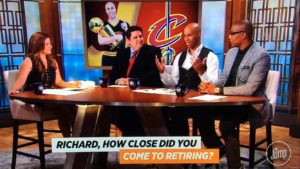 JUST IN: VIDEO: Richard Jefferson Reveals Why He Wanted To Retire & What Changed His Mind
Related TopicsChis AndersenCleveland Cavaliers