By Will Goodall · 7 min read 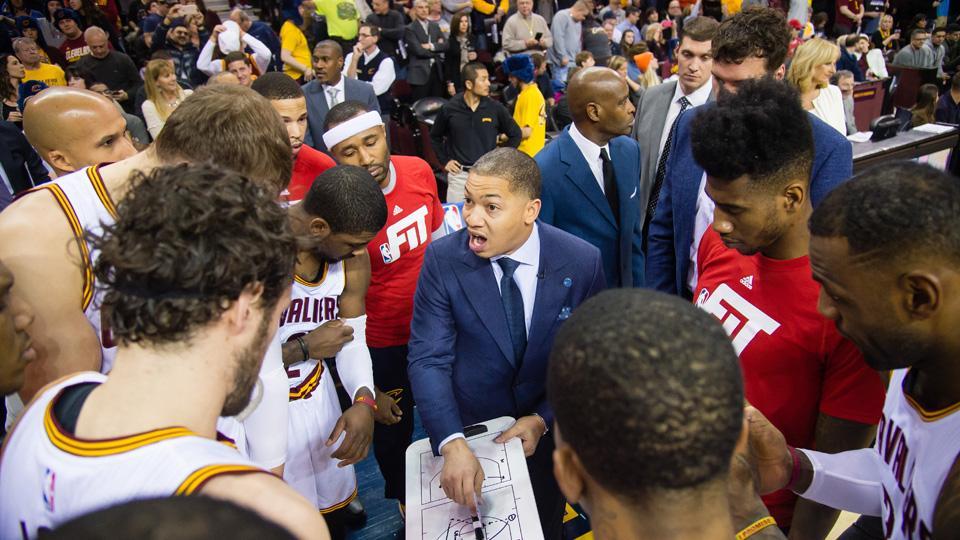 The thing that separates a collection of excellent players from an excellent team is the bond and comradery that the players share. A sense of community takes a long time to foster; that is why you see European soccer clubs recruiting groups of players from academies who already have spent time playing together and why the general belief around the league that the Timberwolves are in a very good position over the next several years. The Cavs, on the other hand, seemed to have just internally collapsed under the weight of its ego’s and it remains to see how the whole issue will sort itself out.

To the casual viewer the chemistry issues were solved back over the summer. The Cavs had lost the finals, LeBron James went to LA and hung out with his friends, and Love resigned almost immediately after words. Even Kyrie Irving’s injury was seen as a positive with Kevin Love and James getting to share more court time. By the half way point in the season The Cavs were sitting at 31 and 11, a 10 game improvement from the year before and the players looked more comfortable. However in the back of every fan’s mind, something still wasn’t right. Timofey Mozgov wasn’t playing like he did the year before, not just that he was injured, but he was taking shots that in no way should have been part of the play. One day after a close loss to the Golden State Warriors, the full strength Cavs were blown out by a Trailblazers team that wasn’t even playoff bound. It’s not often that a team in this good standings needs a change of personnel, however these Cavs are more often the exception, not the rule.

I liked David Blatt as a coach. I thought he was an offensive mind comparable to those of Phil Jackson, Gregg Popovich and Brad Stevens, however he was ill-prepared to handle the Cavs team post-James announcement and his firing, while not well-deserved, was needed. Blatt was a rookie head coach, and on top of that he was dealing with the biggest name in basketball since Jordan. He was hired on to be a glorified player development coach for several years until both he and the young Cavs were ready to compete, not the immediate leader of a title contender. He was unprepared, and possibly even star struck both by the new league, new environment and most of all, new players. Blatt never calling out James may have been the final straw in an already toxic environment, and while it may not have been only his fault, a stronger voice from the authority in the locker room may have helped prevent these issues.

This week, Lue was asked if #Cavs were having fun playing; said it’s last thing he says in locker room. They look like they are last 4 gms.

While he may not have intentionally caused any chemistry issues, James may be to blame when it comes to some smaller things. The Cavs locker-room was not united. Looking at James’ Instagram, you see that he enjoys hanging out with James Jones, JR Smith and Jared Cunningham more than the rest of his teammates. The team has cliques, Shump and Kyrie, Mozgov and Khan, and while it’s fine to be closer with some players than others, these clique’s sometimes spilled out onto the court. Harsh words by James were far more likely to head towards Mozgov than Smith for a boneheaded play. Sure great players have hated each other and won championships before (See Shaq and Kobe) but hearing stories about the locker-room after practice consisting of “15 players and 15 Uber Rides” is never a bode of confidence. LeBron is not the only one at fault, David Griffin has not instilled a sense of permanence in the locker room either. On Sirius XM NBA talk radio, Griffin was cited as saying that “in this league, there is no such thing as untouchables.” It was reported that during the all team meeting called to announce David Blatt’s firing that multiple players believed the meeting was to announce Kevin Love had been traded. Even Blatt had inklings of instability being quoted as saying “it’s either me or Kevin Love” to friends. These tensions are never healthy for an organization, and even with Blatt’s skill as a coach being almost second to none, Lue needed to step in to right the ship.

Lue might not have the offensive mind that Blatt was, but to compensate Lue has two things going for him, confidence and likability. Lue was an NBA player, something that James sought for in a potential coach since his days with Mike Brown, and with that NBA experience comes the ability to think under pressure. Stories of Blatt freezing up during timeouts, and calling plays for players who weren’t even in the game are typical of a rookie head coach, but not something that a championship calibre roster can afford. This is where Lue excels; even when he was the defensive assistant he was calling plays, timeouts and showing poise and confidence while knowing the unspoken rules of the NBA. Lue also has had the support of the players since his hiring. Many sports journalists had claimed Lue was a candidate to replace the Suns head coaching position next season due to his personable nature and ability to settle locker-rooms, something the Cavs desperately needed.

Improvements under Lue could be seen almost immediately. In Lue’s new offensive system the defensive game is critical, and players are required to play harder and with higher tempo. The Chicago game shows a perfect example of Lue’s progress. A little more than 5 minutes into the first quarter, Kevin Love checked himself out of the game, which showed improvement in two fronts. First it showed that in this new system Love was applying himself, he was actively seeking to defend, and was clearly working harder than he had in the past, but more importantly Lue has found a way to really start pushing for team success. Love could have stayed out on the court, he is the starter and the All-Star (at least in our hearts) but he valued team success and bringing a fresh body out on to the court over his own minutes and stat line. Conversations about branding also show notable maturity even in the short week since Lue took over. Despite being encouraged by Lue to solidify their brands, as young stars should do, Irving and Love independently stated that they would prefer to focus on team chemistry than personal goals at the moment. James actively sought to squelch a rumour that normally would be brushed off, and while not saying anything positive about Blatt, has not actively attacked him in the public eye not that he can.

Lue has shown that he is willing to do what Blatt was not. After his first game as coach, a loss to the Chicago Bulls, he actively called out James, Irving and Love, as well as the rest of the team’s key contributors, for not being in the physical shape needed to play in the league. Blatt struggled to do this at all, and according to former Cavalier Brenden Haywood:

“We see a fast break and LeBron didn’t get back on defense or there’s a rotation and he’s supposed to be there, and you (Blatt) just keep rolling the film and the whole room is quiet. We see that as players. That’s when … as a player, you start to lose respect for a coach.”

Lue on the other hand seems to have no problem calling players out when they aren’t preforming at the level they should be. The Cavs are noticeably happier under Lue. The joy in silly handshakes pregame, smiles on the court, and playing with a more pass first mentality may have been something Blatt could have fostered over time, but under Lue it seems to come naturally. In the end there still are questions, can Lue coach at a true NBA star level, is Lue’s replacement at assistant going to be as good as him, what will happen after the honeymoon period is over? But as of now, Lue has proven that despite a rocky start, he may just be the man for the job.

Tyronn Lue is turning the Cavs back into a team that is capable of beating the Western Conference champion.