Brad Stevens still considers Cavs as 'the team to beat' despite Celtics securing No. 1 seed The Boston Celtics may have secured the top seed in the East with an easy win on Wednesday against the Milwaukee Bucks, but their head coach knows that’s not enough for them to be considered the favorites in their conference.

Despite being a seed lower than them, Brad Stevens admitted that the Cleveland Cavaliers are still the team to beat and they deserve the label of title favorites. He cited their finals experience, via Mike Petraglia of WEEI.com, as their main advantage heading into the playoffs.

“No, they deserve that. Cleveland is the team to beat. There’s no question about that. They deserve that. They’ve been to back-to-back finals. So, until somebody knocks them off, as a defending champion, I think that’s a fair way to view things.”

With a well-rested lineup to start their postseason this weekend, the Cavaliers will look to dominate their first round opponents, the Indiana Pacers, to send a strong message to the rest of the field that they are the defending champions for a reason.

The Celtics, on the other hand, will go up against the Chicago Bulls in an intriguing matchup. Should the C’s and Cavs win in the first two rounds, they will setup a meeting in the Conference Finals, which is expected to be a hotly contested one, as both teams will look to represent the East and compete for the championship. 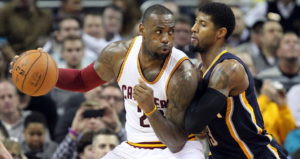 JUST IN: Cavs to face Pacers in 1st round of playoffs
Related TopicsBrad StevensCavaliersCeltics